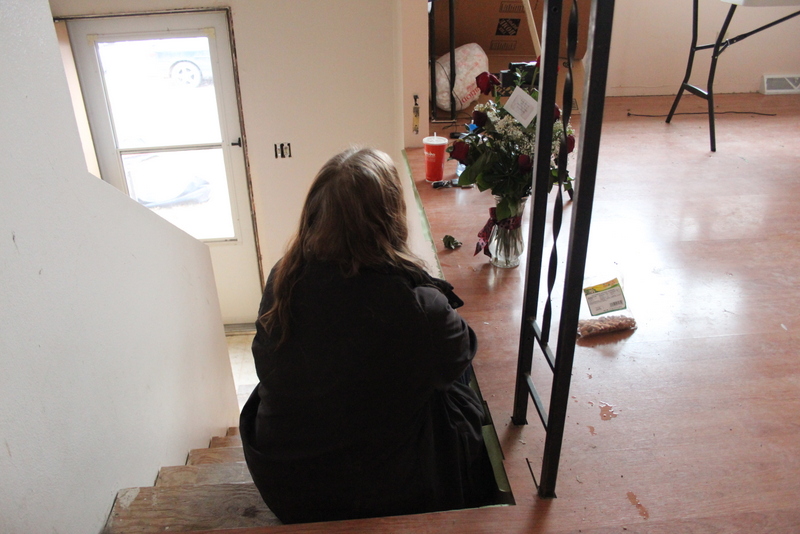 Pierce, Colorado homeowner Kristy Allbrandt sits on the stairs of her foreclosed home next to a bouquet of roses sent by one of her many supporters. photos: Tiburcia Vidal/The Nation Report

PIERCE,COLORADO-Members of the Colorado Foreclosure Resistance Coalition-CFRC, Move On, Occupy Denver, Occupy our Homes, and the Home Defenders League defended Pierce, Colorado homeowner Kristy Allbrandt in remaining in her home in the face of today’s scheduled eviction by the local sheriff’s department. 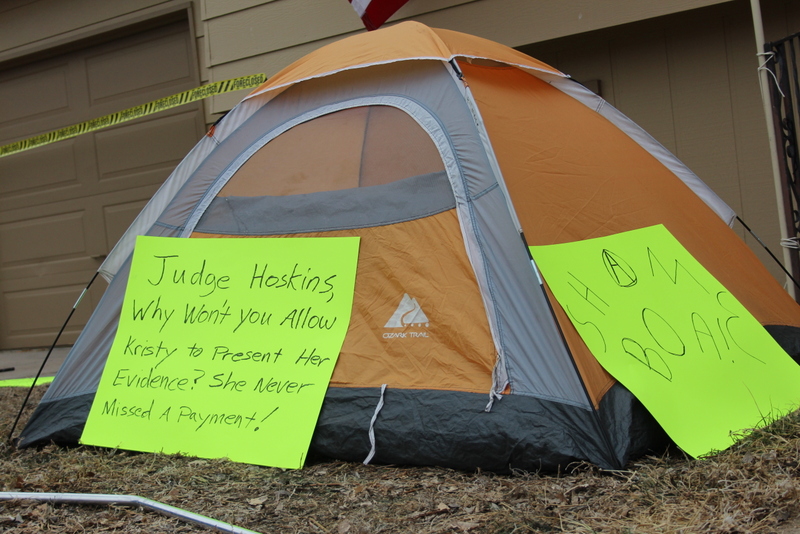 Speaking to 19th Judicial District Judge Julie Hoskins, the protester questions the Rule 120 hearing in Colorado where homeowners are not allowed to present their cases in foreclosure proceedings.

Allbrandt has been fighting the threat and eventual foreclosure of her home for four years, all the while securing certified mail receipts for her payments and recording phone calls with the processor Fannie Mae, the servicing agent of lender Bank of America.  She confirmed what homeowner defenders have long maintained are common practices in the state, “They got paid hand over fist on my house, charged me so many illegal fees,  [that] ended up being $30,000 over what they would have been entitled to in the first place for the mortgage and then on top of that, they were inflating my interest rate.  I’m on a conventional fixed.”  A conventional fixed mortgage means that her interest rate should have remained the same throughout the life of her loan,

“And they were illegally inflating the interest rate and putting more money into interest and not principal.  I wondered why the loan had only gone down like $6000 in eleven years.  It didn’t make sense.  On my home loan modification applications my attorney told me that they get paid a few thousand dollars from Fannie Mae for every application that they turn in for loan modification.  They had me fill out seven of them over 4 years that they never intended in doing a modification with anyway.” 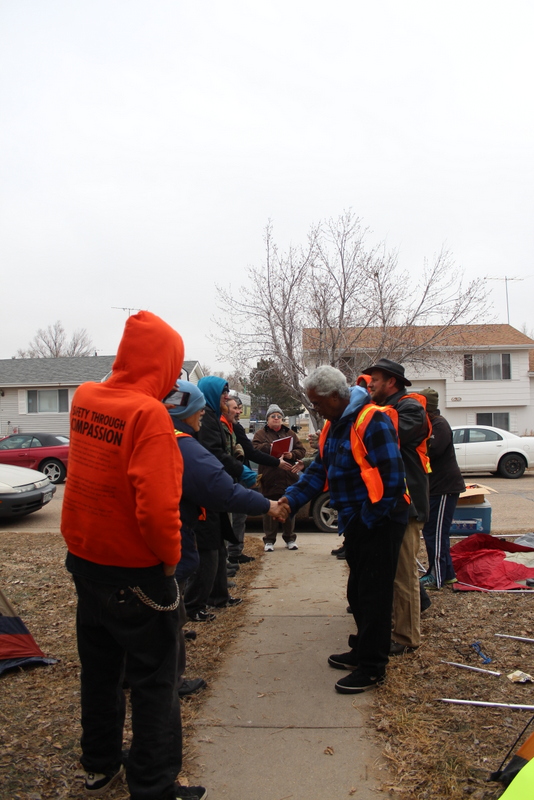 Homeowners have reported to CFRC that banks have refused to work with them until they miss three payments thereby opening up the process for loan modification-a process where homeowners say they were offered the opportunity to rework their loans but also that the practice has been fraudulent.  Alllbrandt shared her experience with the process,

“And from what some of the [bank] reps would tell me, they never had any intention of modifying my loan anyway.  I had one rep that was laughing at me, ‘you’re losing your home.  You’ve got to come up with $30,000.’  And then I told him we were waiting on you guys to give us an offer.  That’s what you said you were going to do for the modification and he started laughing.  He said, ‘We were never going to modify your loan.  Never.  You were never under review and you were never waiting for an offer.  We were never going to do that.’” 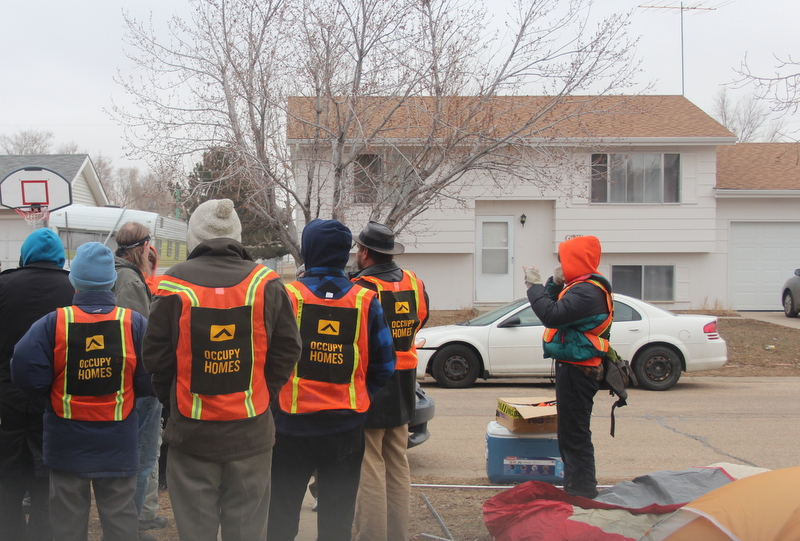 Darren O’connor of CFRC said that the tiny town of Pierce, Co near Fort Collins has been particularly hard hit by what the group asserts they have been witnessing in other areas of Colorado,

“How the banks get away with [this] is silence and shame and people thinking that it’s only happening to them but Kristy is a very brave individual who called out for help.  She also did all the right things.  She got one of the best attorneys and did everything right.  And what people don’t know is when they hear about foreclosures and what’s happening they think, ‘Well there goes another deadbeat homeowner who didn’t make their payment.’  The sad, the very sad truth is people like Kristy are making their payments and they’re not being cashed.  Bank of America saw an opportunity to stop taking her payments so they can take her home.  They have motivation to make fast cash today, take this home, and resell it.  It’s a win-win for them and a complete loss for this community.  Someone else will move here and they can do it again today.”

Public records show that in a population of over 800 people, 170 homes are in foreclosure in the Pierce area.  O’Connor added, “But it comes all the way down to a little town In Pierce, Colorado where probably something like a quarter of the town is under foreclosure right now.” 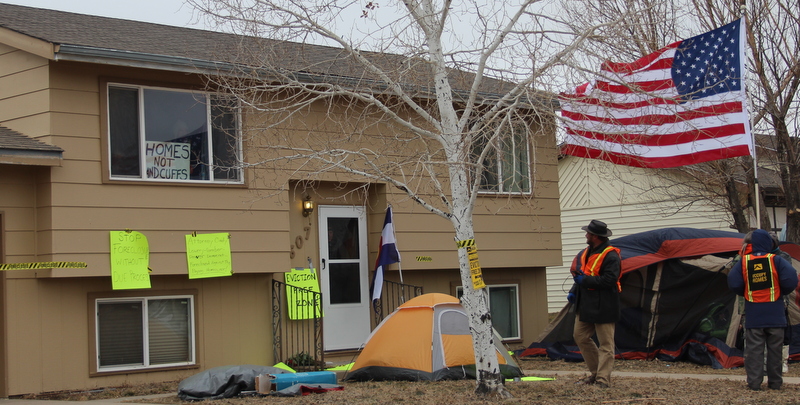 The sign in the window reads, “HOMES NOT HANDCUFFS” referring to the foreclosure-homelessness-jail pipeline, the issue that many human rights coalitions work to prevent.

Feeling confident that she would remain in her house, Allbrandt had been remodeling her home for a number of years but discontinued the process when she came to realize that she was up against forces that were in place to take her home,  “I’ve been doing all of the remodeling before this happened and I tore all that out.  I refinished everything, did this, and refinished the floors, and did the whole entryway.  I didn’t know.  Should I continue to finish remodeling the house or should I stop?  I continued for a while because I did the upstairs first, and then I did the entryway in 2010 and it was before they had started foreclosure.  After that it was like-I want to finish but I don’t feel like I can because of everything going on.  Like I don’t want to remodel the house and then lose it.” 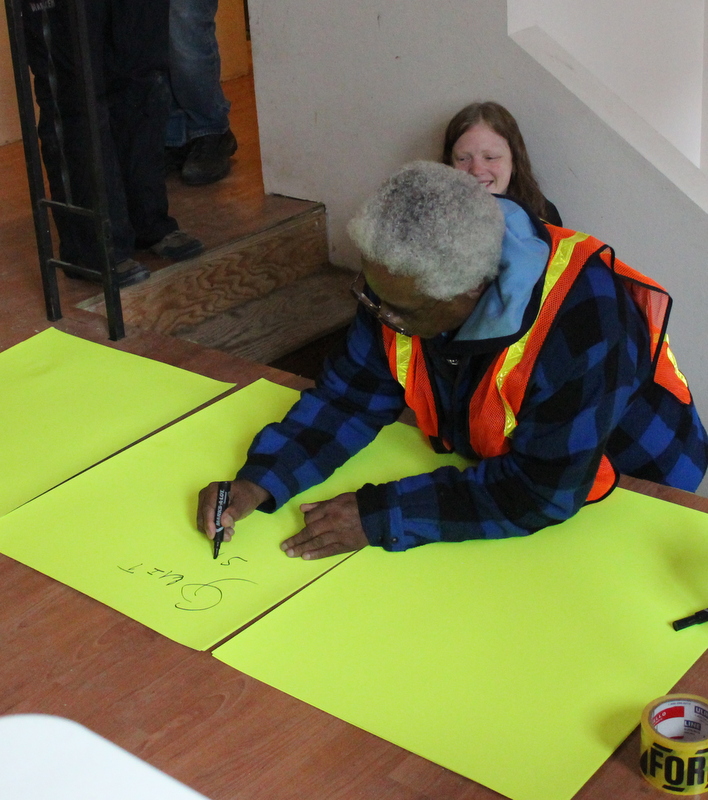 Longtime Denver activist, Virgil Robinson makes a sign to hang outside the home.

Virgil Robinson, a longtime Denver activist who was an original founder of the Martin Luther King Memorial Parade in Denver drove from Denver to help Allbrandt defend her home and described the lengths he was willing to go,

“The main reason I’m up here is because an injustice is being done to this lady that lives in this home.  Not only is it illegal but it’s unconstitutional.  This lady did not receive her rights and due process in court.  The banks and the mortgage company are doing this to a lot of people.  This is not just happening here in this county.  I think this is a way that the banks and the mortgage company [have come up with] as a way to steal people’s homes.  These people are hard-working people.  They have a right to live in their home.  This lady has every right to be here.  She made all of her payments.  But still the banks and the mortgage company decided with the judge that this woman has to be put out.  Evicted.  And if she’s not, then she can even go to jail.  I and a few others of us probably will go to jail today because we know what our constitutional rights are, we know what our human rights are and we’re not going to allow this anymore.” 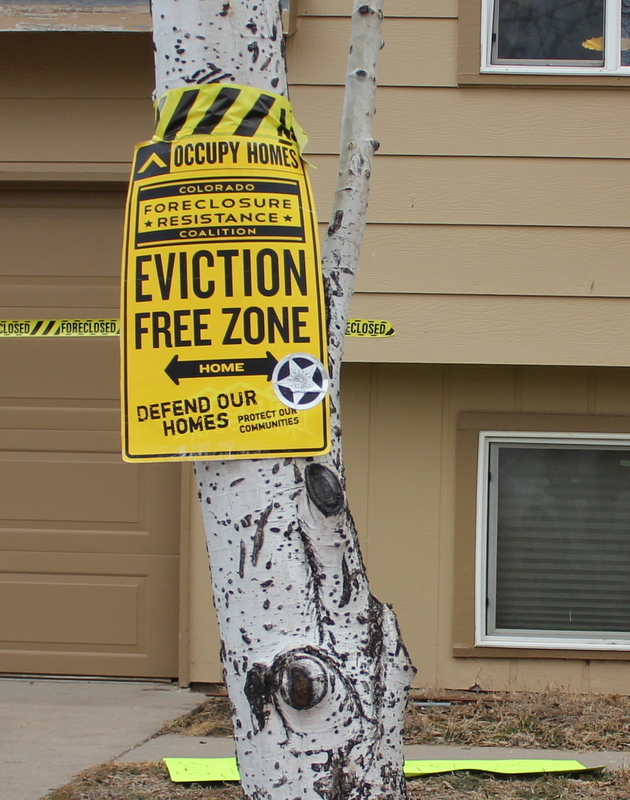 Allbrandt filed one last motion to dismiss and heard from her attorney by phone of the outcome during the occupation, “[19th Judicial Judge Julie Hoskins] dismissed all of our claims saying that there wasn’t any legal merit and then on the motion to reconsider, she looked at it and said she wasn’t going to reconsider because she still didn’t see any legal merit.  And she dismissed everything ‘with prejudice’ so that we can never sue them again.”  She questioned why the the case was dismissed with prejudice when in her experience and through communication with her attorney, she had come to know that most cases are dismissed “without prejudice” thereby allowing for a homeowner to revisit their cases.

By the end of the day the sheriff’s department did not go through with the eviction after driving by the home twice.  The coalitions that were occupying Allbrandt’s home had placed their signature 99%-labeled tents, signs, flags, and police tape in the yard of her home.  One read, “Eviction Free Zone.” 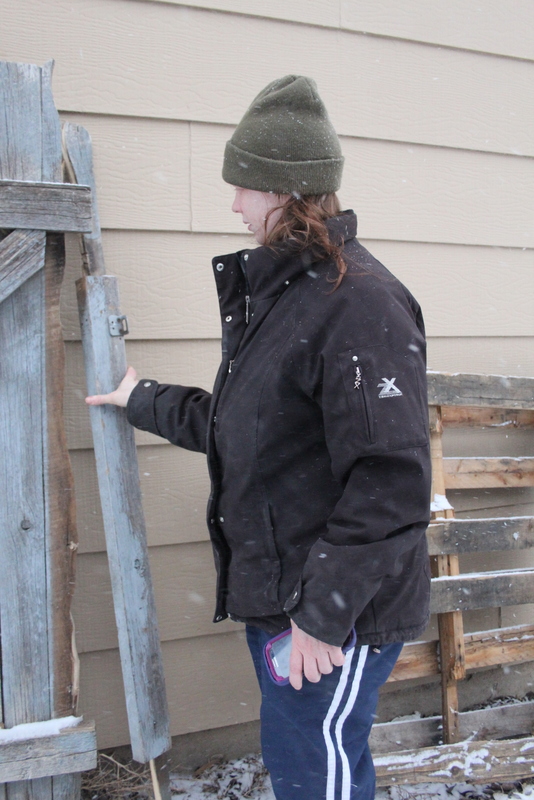 Allbrandt shows The Nation Report where she believes sheriff’s department deputies kicked in and broke her back gate to hang an eviction notice on her back door thereby allowing her pets to escape.

Darren O’Connor, “When we stand together maybe the banks will have to start paying attention when they realize that we are paying attention, that we know they are stealing our homes.”

Allbrandt responded to the latest judgment, “It pisses me off how much money they make off of doing this to people.”