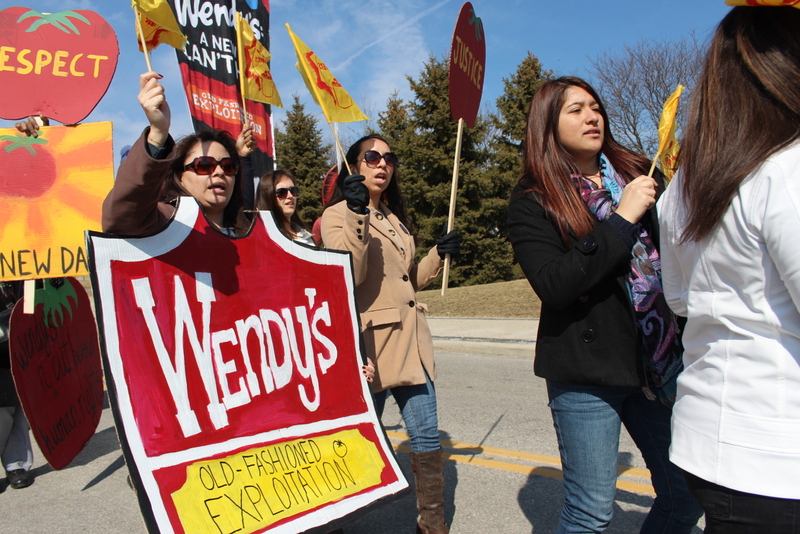 Marchers began at Coffman Park in Dublin, Ohio and walked through the town to end at the Wendy’s Headquarters. photos: Tuburcia Vidal/The Nation Report

DUBLIN,OHIO-Today over 1000 supporters of the Coalition of Immakolee Farm Workers-CIW demanded that the Wendy’s Corporation sign a Fair Food Agreement for the farm workers who pick the restaurant’s tomatoes.  They marched through the city of Dublin, Ohio-a suburb of Columbus-to Wendy’s Headquarters to take their message.

Mostly Latino, Mayan Indigenous, and Haitian immigrants make up the membership of the CIW-in existence since 1993.  Out of that original organizing, that included a hunger strike in 1998 and a 234 mile march through Florida, the group began to experience changes in declining wages.  They organized for better working conditions that included the fight against trafficking, violence towards them, sexual assault, and modern-day slavery.

In 2010 the CIW formed the Fair Food Program.  The program creates a unique model partnership with farm workers and Florida tomato growers and buyers. The program consists of worker education programs during work hours, a third-party monitor and a penny more per pound of tomatoes.  Signers also agree to buy tomatoes only from growers that participate in the Fair Food Program. 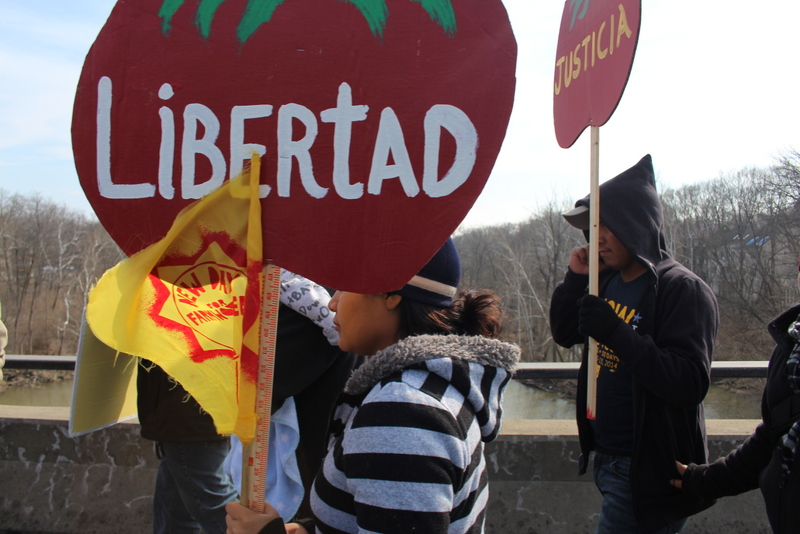 Simon Cedillo is an independent journalist and documentary filmmaker who joined yesterday’s action from Oaxaca, Mexico.  He gave The Nation Report his perspective on how and why farm worker movements are necessary,

“It’s important to be here to support the Coalition of Immokalee Workers because they are doing a type of political work that ends up functioning outside of institutional structures.  What is provided by a system for people to appeal for their needs is virtually impossible to compete against:  transnational corporations, the lobbying industry, public corruption that makes it impossible to compete against financial interests that outweigh certain sectors of society.  It’s more than just the message.  It’s the methodology in confronting these power interests through direct action and community building.  It’s a coalition of all sorts of people from civil society from all sorts of sectors who have had to recognize the fact that farm workers are treated as disposable in this society.

I think it’s really important to talk about the root causes of immigration and I think that the Coalition has done that but I think that it’s important for all of us to be pushing the conversation around an imposed military political economy that is coming from the United States and is imposed in Mexico.  It’s creating all sorts of political, economic, social,  and cultural violence against communities who are again, considered disposable:  indigenous communities, farm working communities, students, workers, teachers, women in general, and indigenous women in particular are systematically targeted by what we call the neoliberal, political, military, economy which is a system that is all about extracting natural resources, exploiting cheap labor, or demanding cheap labor, or imposing cheap labor, and is all about taking over control of entire territories and as a result displacing a substantial amount of people.

One of the things that will always stay in my mind is the time that the National Geographic published an article about the Immokalee Workers and the cover said, ‘Modern Day Slavery’ but they didn’t run that cover in the United States.  The story was in the magazine but the cover was of Africa and a zebra or something like that.  But all over the rest of the world they ran the Modern Day Slavery cover.  Right now there’s a Time Magazine cover.  The cover is Mexican president Enrique Pena Nieto who won through mass electoral fraud, and is definitely responsible for tremendous amounts of privatization and repression in communities that is continuing to push people out of Mexico, people into the United States.  We have these two situations where major mainstream respected media sources are contributing to a false narrative.  The cover of the Time Magazine with Pena Nieto says,  ‘Saving Mexico.’  So for people to think that there isn’t corruption here, for people to think that there is actually free press here, for people to think that they are getting informed here is so naïve, so naïve.  And people need to challenge that.  That’s one of my favorite things about the Immokalee Workers.  They force people to challenge that.” 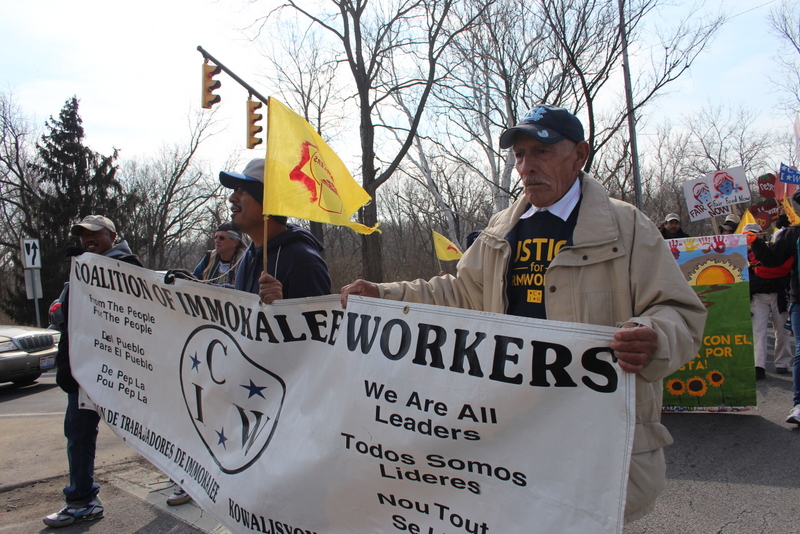 Alejandro (far right) carried the CIW banner along with his colleagues through the town of Dublin, Ohio where the Wendy’s Corporation Headquarters is located.

An ally of the CIW for 5 years now, musician Liz Fitzgerald has marched with the Immokalee Farmworkers through Florida but also in Denver to one King Soopers store.  The Kroger King Soopers Corporation has refused to sign onto the Fair Food Agreement despite pressure from local groups such as the Denver Fair Food organization and the Denver Student Farm Worker Alliance.  Fitzgerald explains her involvement in the farm worker movement,

“This [movement] is where I really started to understand the complexities of the food movement and sustainability that was forgotten about.  Now I have a community of friends and family that I care deeply about and that I want to…that it feels good to be doing this work together because we all have so much passion for it.”

What is music’s contribution to a movement?

“For me, it’s important for a movement to have a lot of art and fun because it can be really serious and there can be a lot of really intense emotions and I think highlighting excitement and fun and freedom is a really important thing to do and that people feel included, that they really want to be doing this work and that they feel energized by it.  Protests can be kind of boring or methodical.  Once you’re dancing a little bit, it’s not a chore anymore.  It’s like this fun thing that you get to do.  That’s important for sustaining the movement long term.” 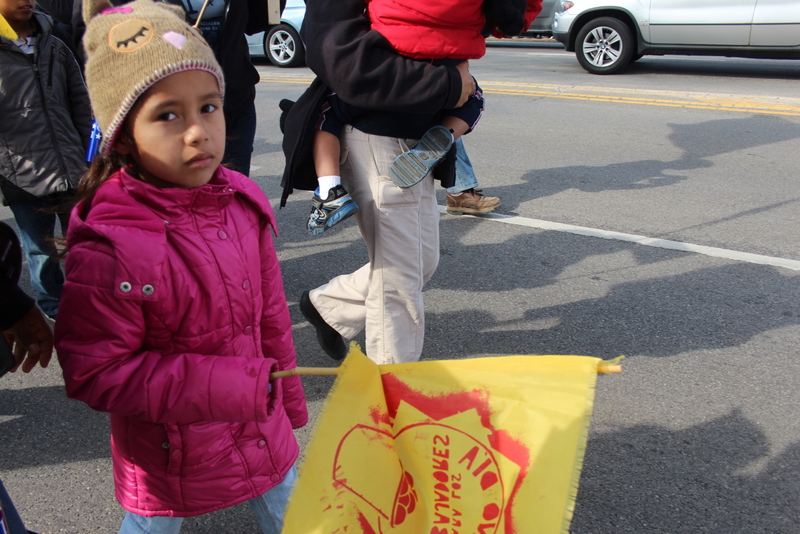 Marchers began their 2 mile journey from Coffman Park in Dublin, Ohio to the Wendy’s Headquarters.   A group from Dennison University was holding a sign of support.  Dale, a Junior at Dennison shared “We’re here with a group for school.  We’re here for the rights of the workers who are picking the tomatoes. [We’ve known about this issue] ever since our professor brought it up in class so this year we learned about it.” 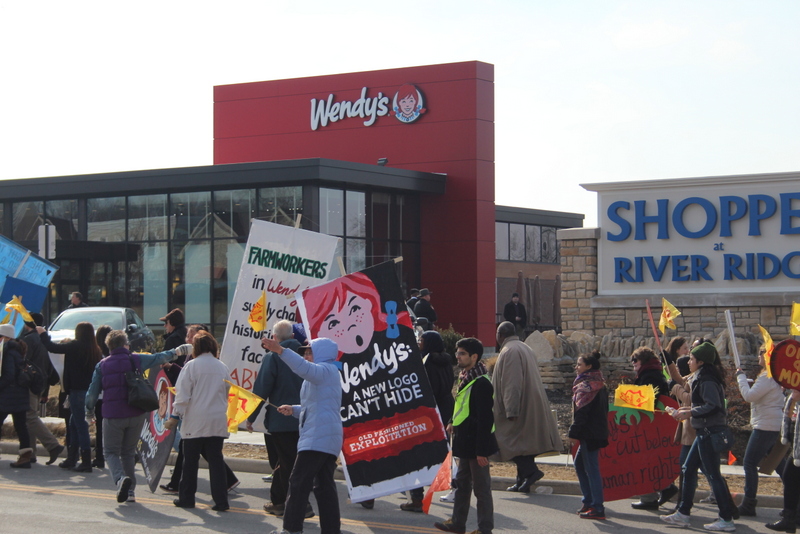 Another woman was also marching while using a cane to help her through the two miles.  Olga Sandman is on the board of the  National Farm Worker Ministry and proudly said that she has been with the movement since 70’s and with the Immokalee workers since the beginning,

I am on the board of the National Farm Worker Ministry, that’s Catholic and Protestant all over the country [that] has supported all the organizing of farm workers since 1970.  These are remarkable people.  In 20 years they have gotten 12 corporations to sign with them for justice.  It’s incredible.” 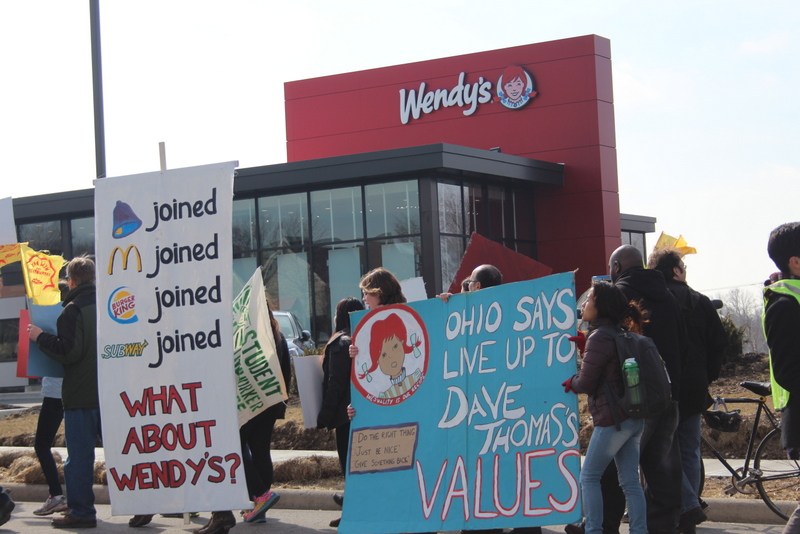 Alejandro is an Immokalee farmworker in the tomato fields,

“We are here from Immokalee.  We work in the tomato fields. We came here with a demand for Wendy’s to raise the pay to a penny per pound for tomatoes, which they don’t want to give us.  I’m from Mexico. I’ve been in Immokalee for three years. I first worked in North Carolina and then in New York in the apple orchards. I’ve just been here a short amount of time. This is the first year I’ve come with the  CIW here.”

What is the current situation in Mexico from where you come?

“The system is difficult right now. There is a shortage of jobs and the work is very poorly paid. Actually it’s a similar system on this side of the border here in North Carolina.  You are forced to work, well not obligated but that’s the situation.”

Are you here with your family or by yourself? 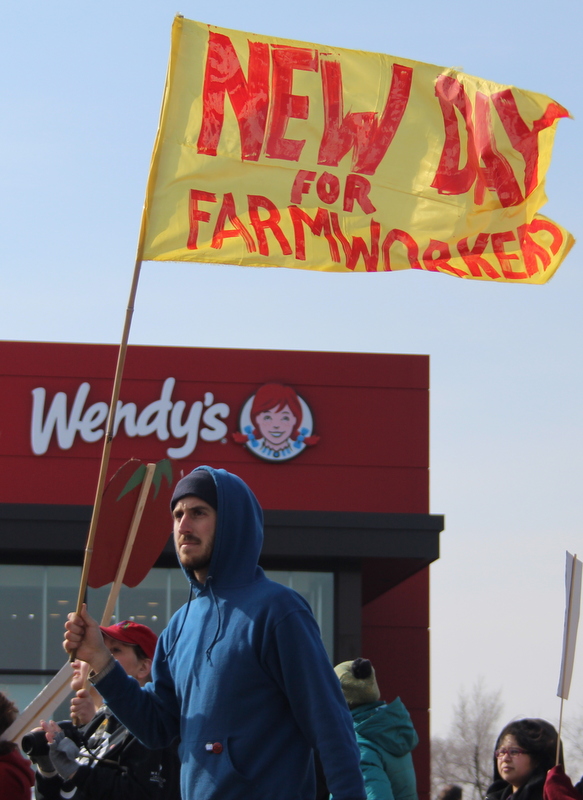 In October of 2012, the Chipotle Corporation signed onto the Fair Food Program just days before a major action was planned by the Immokalee Farm workers along with farm worker ally Denver Fair Food and the Student Farm Worker Alliance. The Trader Joe’s Corporation signed the Fair Food Agreement in February of 2012 and became the second grocer after Whole Foods to sign onto the Program.  The Trader Joes’ agreement came just days before another major action was planned by coalitions to oppose the company’s opening in Boulder, Colorado.

The CIW in the recent past has also focused efforts on the Quiznos corporation nationally and the Publix grocery chain of the southwestern US.  Although an estimated 40 percent of the winter crop of tomatoes that is transported to the western US comes from Immokalee, Florida, the Kroger King Soopers grocery chain continues to refuse to sign the Fair Food Agreement.

Most recently in January of this year, the Walmart Corporation joined the Fair Food Program. 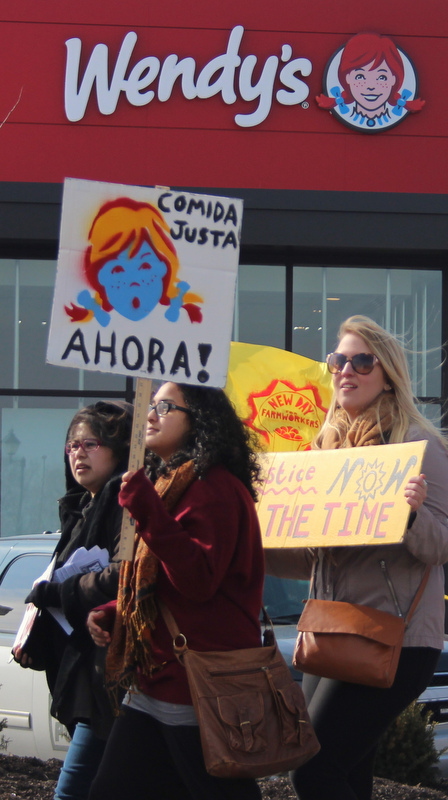