The Initiative which uses police stings to net Phoenix sex workers, and then channels them into predetermined services, has been met with objection by local Phoenix groups including Arizona Prison Watch, SWOP-Phoenix, and Puente-a local immigrant rights group that says immigrant sex workers are overrepresented among those who are arrested and that the arrests of immigrant workers further convolutes the immigration status of the individual. 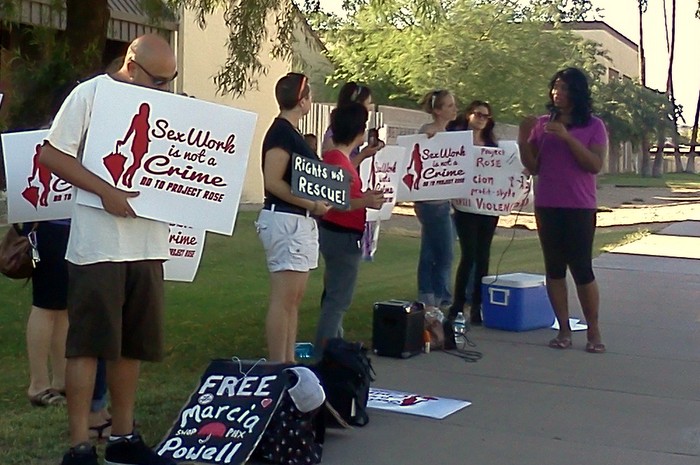 The Sex Workers Outreach Project (SWOP)-Phoenix was established in emergency response to the PDI and to the associated stings which are regularly scheduled to arrest sex workers.  Jaclyn Dairman is an organizer with SWOP-Phoenix and said, “We seek to create a safe working environment for our local sex workers”.  She went on to say that the safety concerns of SWOP-Phoenix included safety from the local police, “We believe that criminalization puts sex workers at an increased vulnerability to health risks and to violence.”

Police violence played a part in the death of sex worker Marcia Powell in Phoenix on May 20, 2012 according to Peggy Plews who writes for the blog Arizona Prison Watch,

“Marcia Powell was imprisoned at the Department of Corrections Women’s Prison in Goodyear, Perryville Prison.  She reported she was feeling suicidal so they put her on a ten-minute suicide watch and stuck her in a cage out in the sun for four hours in 108 degree heat.  Because she was on psychiatric medications that make you more susceptible to heat stroke, she succumbed and died withsecond degree burns on her body and having defecated on herself and all of that despite at least sixteen guards passing her calling for help or asking for water, asking for bathroom breaks.  They mocked her.  Sixteen guards were disciplined for what happened to her.  Seven were referred for criminal prosecution.  Nobody was ever prosecuted.  They all got their jobs back on appeal.  They all walked back onto that yard after killing that woman.”

“I took the diversion program and it was like the worst experience ever.  It was humiliating.  They treat you as like just a thing.  Like [because] you’re a prostitute, this is what’s wrong with you.  This is what you need to be doing.  And like for me, I ’m proud to be a sex worker.  I’m not on drugs.  I’m not like one of these crazy people.  I just needed to make money for school.  And for a transworker they housed me in the men’s facility.  And I was humiliated there.  I was harassed by the DRCs there.  I was harassed by the inmates there.  And I was in isolation there full time for 15 days in a cell by myself.  And I did nothing wrong.  I was in there with murderers, child molesters and like rapists.  So I was in there with a whole bunch of the worst people you can think of.”

“If you think of a sex worker as just like owning her body, and doing what’s right with her body.   I’m not going to sit here and have sex with someone that wants to just use me.  I want to get something out of it.  And I was facing jail because I had that mentality.  And so diversion programs are not the way to help sex workers.  You say they are victims and they are human [trafficked].  Why are you arresting the victims?”

The Laboratory to Combat Human Trafficking at the University of Denver, posed that same question to the Denver police department in a study that was released in May of 2012.  Investigators asked the department what the motivations are for law enforcement to arrest people who pay for sex and what happens to individuals charged with a prostitution-related offense in the City and County of Denver.  The study found that laws surrounding prostitution violations in Colorado do not differentiate between individuals buying or selling sex–that  gender disparities exist in both arrests and sentencing in prostitution related offenses the data of which raised the dichotomies of how those who buy sex–or johns– were described by lawmakers and enforcement as “everyday men” and prostitutes were described as “drug-addicted criminals” or “victims in need of assistance,” also expressed as one major point of contention among the sex worker community of Phoenix. 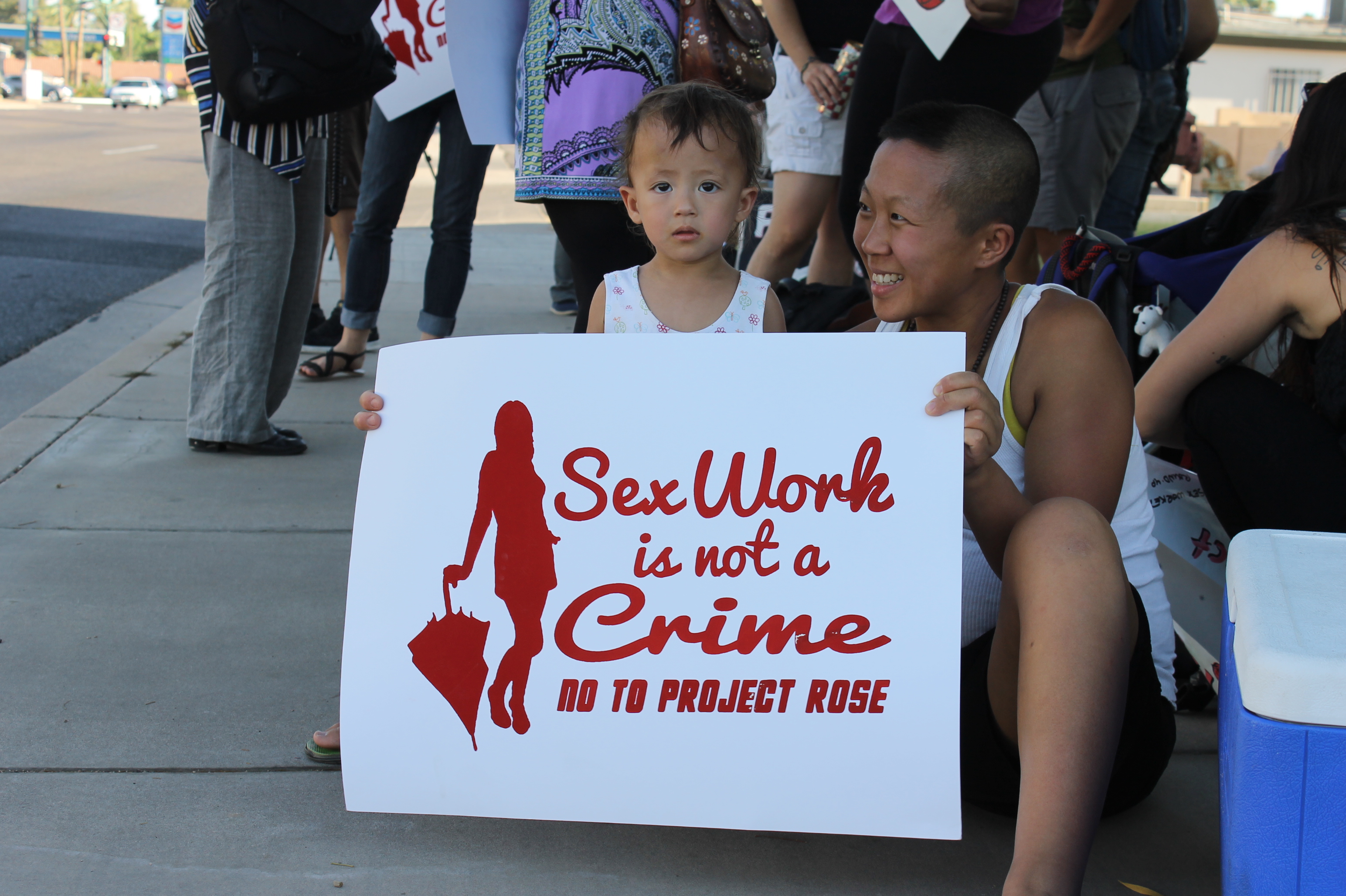 The Laboratory to Combat Human Trafficking study also examined national trends that have focused on increasing penalties for prostitution activity as a means to curb instances of human trafficking. The study revealed that  ”In a climate where the law does not differentiate between buyers and sellers of commercial sex, the vulnerable population on whose behalf these efforts are meant to support, can actually be made more vulnerable due to the severe and generalized criminalization of prostitution activity.”

These unintended consequences are the focus of advocacy groups in the sex worker rights movement including coalitions such as the Red Umbrella Project that is currently fighting Nevada’s AB67.   The group says that the bill is too broadly written because it groups adult consensual sex with child sex slavery, that the potential for government agencies and non-profits to benefit off of their victims is too tempting, and that the bill could further victimize vulnerable populations.  According to members of the group, “Very little in this bill will work because it all has unintended consequences that further victimize vulnerable people and communities and actual members of these communities were not involved in policy-making.”

Excluding the sex worker community from policy-making was one key issue of contention at the 2012 International AIDS Conference in Washington D.C. in July.  Those working in the sex industry opposed U.S. policy in developing the U.S. President’s Emergency Relief Plan for AIDS Relief-PEPFAR, and in addition opposed U.S. policy in place that determined who could enter the country to attend this conference. International sex workers were barred from entering the country for the AIDS conference stirring protest and speech interruptions of invited speakers.  In response to this exclusion, a satellite conference took place in Colcatta, India where both conferences were joined via satellite thereby facilitating global and simultaneous communication between the two locations.  At the AIDS Conference in Washington D.C. Darby Hickey, Policy Analyst for the social justice group, Best Practices also protested this practice, “How can resolutions be attempted when those populations most affected are excluded from the process of policy making.”

The University of Denver study supported this position according to a press release originating from the study’s coordinators, “The study helps to illuminate how the criminal justice system itself may create and exacerbate vulnerabilities that can lead to trafficking and exploitation.  The primary findings of this study demonstrate gender disparities in arrests and sentencing in prostitution-related offenses. Women charged with prostitution-related offenses were disproportionately criminalized compared to men. The assumptions of who a john is compared to who a prostitute is were corroborated with data collected from this study:  Johns are “everyday men” and prostitutes are either “drug-addicted criminals” or “victims in need of assistance.”   Study coordinators further recommended that relevant police officers, command staff, prosecutors, and judges participate in ongoing professional development, policy considerations which involve the affected community, and future research because people who buy sex and people who sell sex are not seen as engaging in the same type of crime.  Women are arrested and punished more frequently and severely than men (for the same violations).   Women are more vulnerable to suffering from the ramifications of anti-trafficking efforts pursued by the further criminalization of prostitution offenses.

Nationwide sex workers have cautioned against the use of anti-trafficking movements, language, and funding to target those who are consensual sex workers who enter into the industry out of a career choice and not under any particular pressure from others. Some civil rights, reproductive health, and sex workers rights organizations have questioned whether those who stand to profit from these diversion programs are behind legislation or policy development including attorney fees, monitoring programs, as well as monitoring devices.

Jacqueline of SWOP-Phoenix had final words to the press, “We’re not for prostitution diversion initiatives, we are for decriminalizing sex work. But even if you’re not for the decriminalization of sex work, it doesn’t make sense to force services down people’s throats . It just completely strips them of their autonomy and their agency and it lacks a nuanced analysis of these people’s lives.”