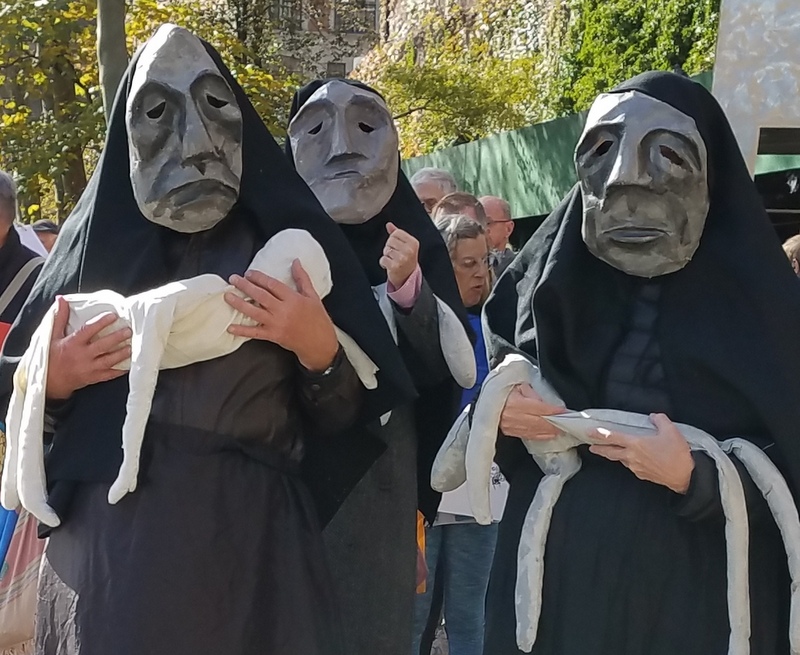 Caricatures representing parents of children lost in the war with Yemen led a march of those calling for peace. (all photos: The Nation Report)

NEW YORK – About 90 peace activists from around the country walked in procession from the United Nations to the Saudi Mission in New York City, and then ended at the Saudi Consulate to call for peace in Yemen, and to demand a halt of weapon sales to Saudi Arabia. 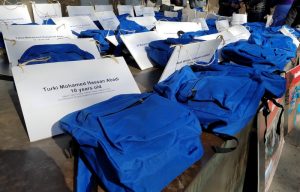 The event followed three days of holding vigils to mourn the deaths of those killed by US bombs responsible for the killing of civilians, but especially the August 9, 2018 bombing of a school bus in Saada that killed 40 children on a field trip, while injuring 39 others.  The bomb used was traced to Lockheed Martin, a US weapons manufacturer involved in sales of munitions to Saudi Arabia.

Former US President Barack Obama banned the sale of such weapons to Saudi Arabia in 2016, but the move was overturned by the Trump administration under then-Secretary Rex Tillerson.

Members of the public along with those employed in the Saudi Consulate who tried to enter the building were told by protesters that it was too dangerous to enter the building.  The danger they said, referred to war crimes committed by the governments of Saudi Arabia, and the US for providing military funding and weapons.  Protesters urged for the acceptance of responsibility on the part of the general public for war crimes in Yemen.

The impetus behind the war?  Some say a land grab.

Isa Blumi, an associate professor at Stockholm University and author of Destroying Yemen, adds that weapons-rich countries that covet other nations’ resources, including oil reserves, natural gas, minerals and in particular Yemen’s geographical position makes the country a target for strategic violence.  “The Americans are front and center, solely responsible for this war continuing on as it is,” Blumi told The Real News Network, “It’s an inaccuracy to call it a Saudi-led attack.  It’s actually an American, U.K., if we’re going to be generous to the tiny empire, campaign against an insubordinate corner of the world.  We’ve seen pictures now of the control room in which American soldiers are behind all the buttons that need to be pressed.  And they’re the ones who are looking into the monitors that will then identify the targets.  And again, they’re the ones who have long mastered, originally in Yemen by the way, the double-tap technique of maximizing the kill around an initial attack.  So, the Americans are, front and center, responsible.”

Jack Gilroy of Binghamton, NY and president of Broome County NY Veterans for Peace was part of the demonstration and said he has long been a critic of Lockheed Martin and that when he first learned of the school bus bombing, that he wasn’t surprised, “[The bombing] did not shock me a lot because we’re talking about tens of thousands that have been killed.”  Gilroy said that he was once assaulted for protesting outside of Lockheed Martin Corporation in Owego, NY, “Lockheed Martin has blood on its hands.  Lockheed Martin is the largest producer of death dealing weapons in the whole world.” 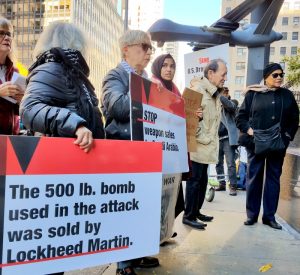 Gilroy reflected on the moment he learned of the school bus bombing, “I felt disgust.  That’s why I’m here today and ready to be arrested.  I have no desire to be arrested but we need to go in and face the Saudis.  And if the police of New York won’t allow us to do that, so be it.  But that’s a very small price to pay for the horror that the people of Yemen are going

“Well we’re just trying to do our jobs,” Kathy Kelly, Co-coordinator with Voices for Creative Nonviolence said was a common response to the Consulate blockade by those trying to enter the building.  But Kelly reciprocated, “If there was some kind of narco-trafficking going on in the office next door to you inside that building, wouldn’t you feel like you had a responsibility to do something?  Well, we have a responsibility to end the U.S. complicity in this hideous atrocity that keeps unfolding every day, and certainly to stand up to the Saudis. And I think people who work within those offices join in that responsibility.”

Protesters chose the location of the United Nations building to hold the week’s events in attempt to raise awareness of the ongoing war on the Yemeni people where 2,000 a month are being killed by military aggression for a total believed to soon reach 60,000.  Deaths from a record-level cholera outbreak and starvation push the numbers even higher, and raise the risk of death to fourteen million Yemenis.

“There are two million people who are actually starving to death.  It’s not potentially starving.  They are starving to death right now,” Colonel Ann Wright who was able to travel on a mission to Yemen 5 years ago explained why she protested,  “Without the US support, Saudi would not be able to do what it’s doing.  At the time we were very, very optimistic because at the time they were having a transitional national congress where people from all of the groups in Yemen were coming together to talk about how they could move forward since the dictator [Ali Abdullah] Saleh had been thrown out of office.  And then to see it disintegrate into this Saudi attack, massive war attacks on Yemen that’s killed so many people, destroyed the infrastructure, the cholera that’s there now, the starvation.  So it’s citizen pressure like this that’s very, very important.”

Currently the UN is calling Yemen a humanitarian crisis where 22 million or three-fourths of the population is food insecure.  The 2017 Yemen Humanitarian Response Plan revealed that “about 3 million children and pregnant or nursing women are acutely malnourished, including 400,000 children under 5 suffering from severe acute malnutrition. This represents a 57 percent increase since late 2015 and threatens the lives and life-long prospects of those affected.”

Lasts month US Secretary of Defense Jim Mattis along with Secretary of State Mike Pompeo called for a “ceasefire in the next 30 days” in Yemen.  Brian Terrell of Voices for Creative Nonviolence protested the US position,  “We need to be saying, our message is not a ceasefire in 30 days.  And it’s not for the warring parties to stop, but for the United States to stop and all the warring parties….everybody.  This war has to stop and stop now.”

Over two dozen New York City Police Department officers arrived on the scene with zip ties, but made a decision not to arrest protesters.  Protesters had earlier said that they were willing to risk arrest in order to raise awareness about the threat to especially children and about 40 blocked Consulate entrances.  No arrests were made.

In a statement released by event organizers, the activists committed to continue to resist, “Our hearts remain with Yemeni families agonizing over the dire plight of loved ones in Yemen. We thank Yemenis who have stood up, in more precarious settings, to call for an end to the fighting. And we look forward to supporting their calls for peace in every way we can, until this dreadful war is over.” 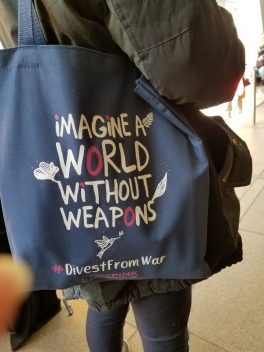 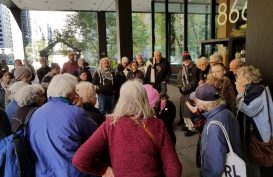 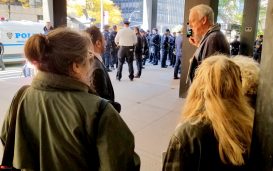 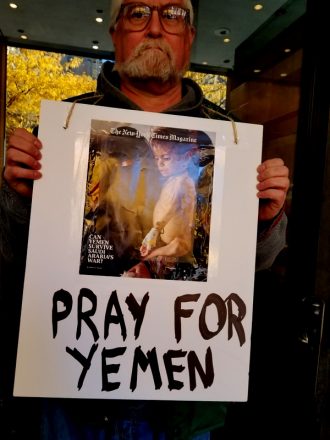 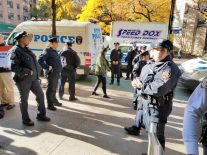 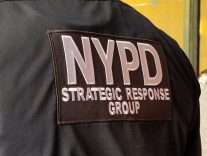 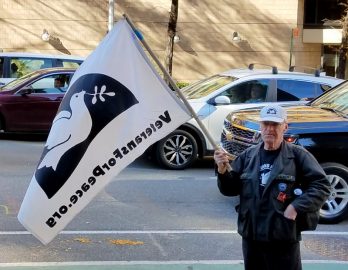 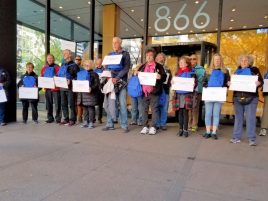 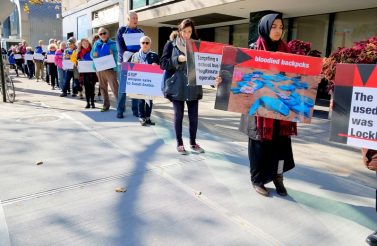 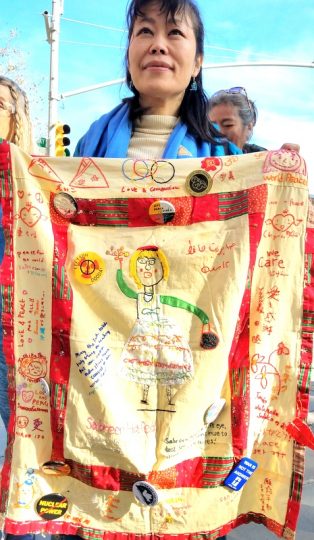 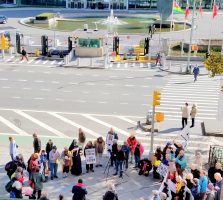 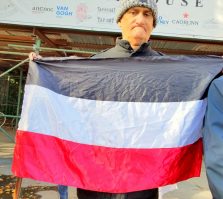 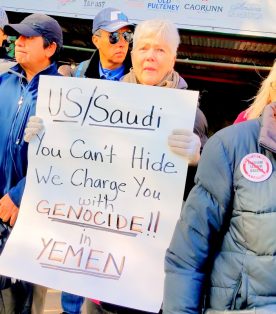 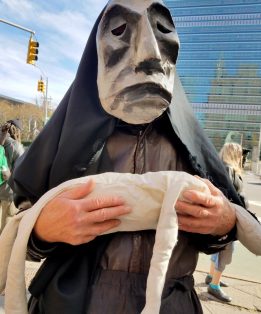 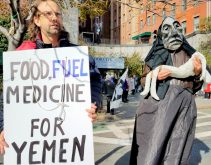 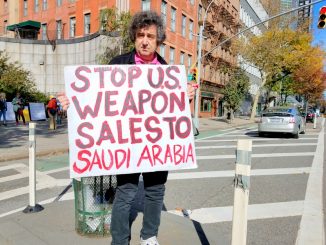 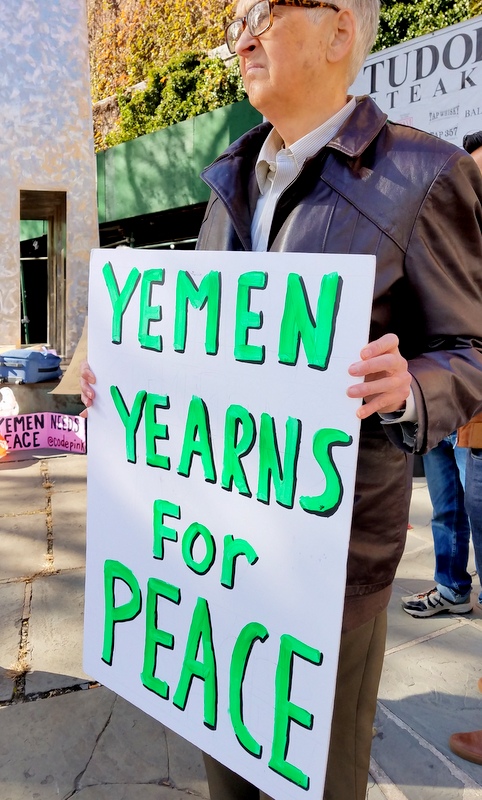