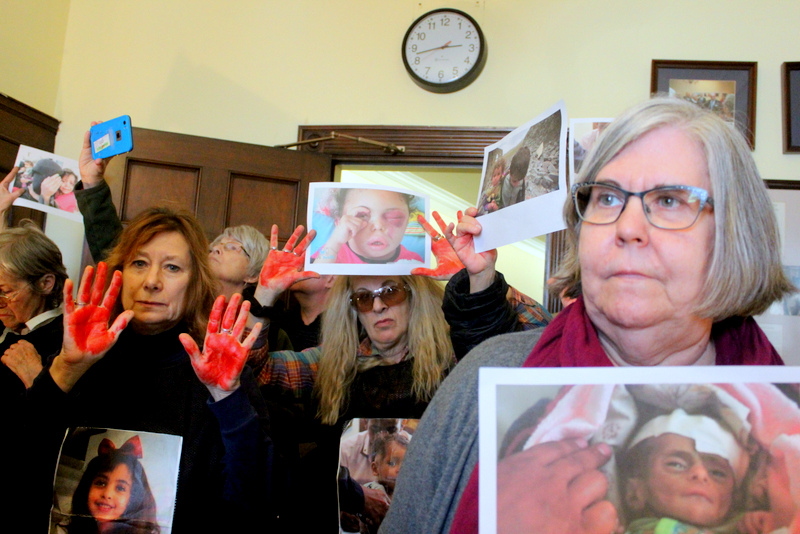 WASHINGTON DC – Members of the National Campaign for Nonviolent Resistance (NCNR) refused to leave US Representative Steny Hoyer’s office at the 1705 Longworth Congressional Office Building on Thursday until he agreed to work for the cutoff of US weapon sales to Saudi Arabia.  They, along with peace organizations such as Voices of Creative Nonviolence of Chicago called for a meeting with a foreign policy aide to present three demands:

While in his office, NCNR voiced outrage over the bombing of especially babies, the resulting famine of the bombings, and illnesses that remain the impacts of the war on Yemen.  Over a million in Yemen are affected by typhoid, diphtheria, and starvation.

Hoyer, a Democrat representing Maryland’s 5th congressional district including the rural and suburban territory southeast of Washington, DC, has been in office since 1981.

Several in the group criticized Hoyer for taking campaign funds from Raytheon, a leading weapons producer in the US.  All criticized his lack of support for House Concurrent Resolution 81, “The situation in Yemen is dire.  So we are appealing to you, as Minority Whip of the House of Representatives, that you must speak out against Saudi Arabian war crimes, condemn any further arms sales to the Desert Kingdom and help bring to a vote House Concurrent Resolution 81.”

The resolution introduced on September, 27, 2017 by Representative Ro Khanna (D-CA-17) “Directs the President to remove U.S. Armed Forces from hostilities in the Republic of Yemen, except those engaged in operations directed at Al Qaeda in the Arabian Peninsula, within 30 days after adoption of this concurrent resolution, unless the President requests and Congress authorizes a later date, and unless and until a declaration of war or specific authorization for the use of U.S. Armed Forces has been enacted.”

The group intended to discuss with Hoyer, or a foreign policy aide, the contents of a petition that they eventually delivered after expressing frustration with not having secured an appointment, or even a response from the representative for a meeting, “NCNR members and constituents have repeatedly requested a meeting with Rep. Hoyer or an aide to discuss the U.S. military’s role in the devastating attacks on the people of Yemen, ” the group said, “Unfortunately, all requests have been rebuffed.  The National Campaign for Nonviolent Resistance believes that members of Congress have a duty to meet with citizens and constituents as part of the democratic process.”

Signers to the petition were affirming their protest of taxpayer dollars to Saudi Arabia as it read:

“We find this situation unconscionable that our government is using U.S. taxpayer dollars to support a country, well-known for violating human rights and most responsible for the death and destruction taking place in one of the poorest countries in the world.”

Different messages were forwarded to the group of protesters who at first were told by office staff that they would be able to secure an appointment with an aide if the group would just leave the office, but as a group the decision was made to stay.  Kathy Kelly, co-coordinator with Voices for Creative Nonviolence said that after having spent a year in prison on one occasion, and another for three months in peaceful resistance to illegal US military activity stood firm about continuing to occupy the office, “Young Yemeni people are so afraid to speak up because of possible torture and detention.  I could take this time, and I don’t face anywhere near the risks that people in these war zones face.”

At 7:30 pm about ten police officers arrived to arrest the group.  Occupiers were handcuffed and taken out the front of the Longworth Building to Capitol Police Headquarters.  The seven arrested were Janice Sevre-Duszynska and Richard Ochs of Baltimore, Alice Sutter of New York City, Malachy Kilbride of Maryland, Kathy Kelly of Chicago, Phil Runkel of Milwaukee, and Joy First, from Mount Horeb, Wisconsin.

All were charged with unlawful entry and released about midnight.  All were ordered to appear in court on January 31. 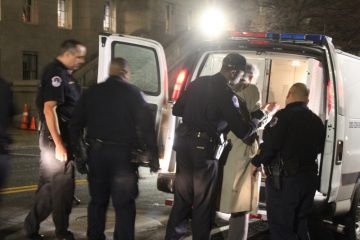 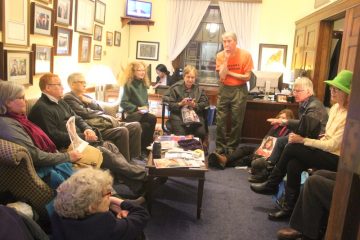 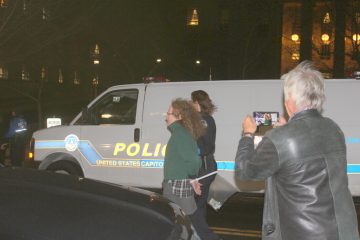 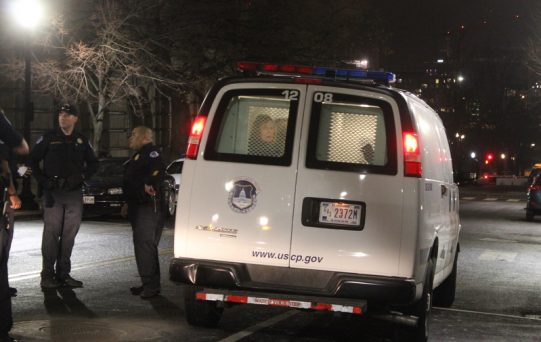