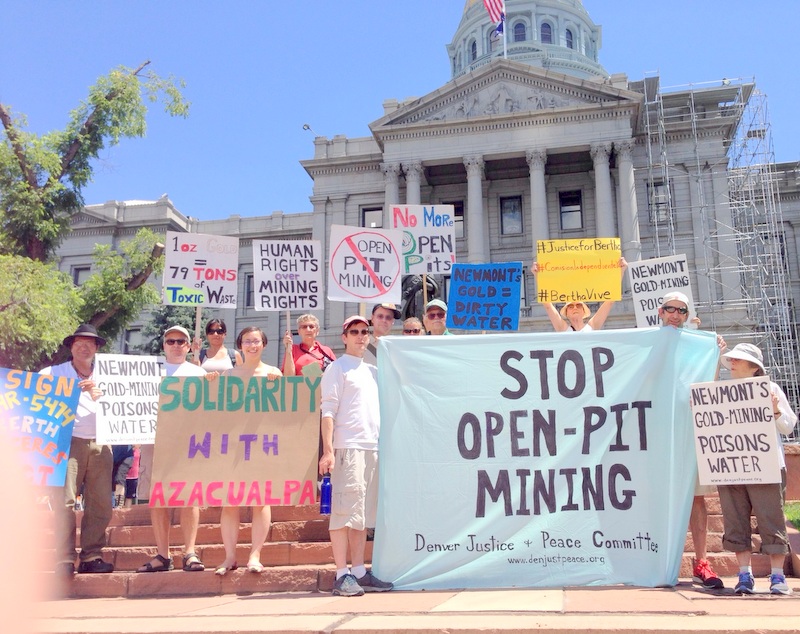 Denver was one city among many globally that marked the Global Day of Action Against Open-Pit Mining on July 22.  And the Denver Justice and Peace Committee (DJPC) was one organization that turned out members in support of a day to remind the public of the dangers of open-pit mines, but also of the dangers toward those who work against them.

DJPC has closely monitored one mine in particular.  The Yanacocha which is majority owned by Newmont Mining of Denver and located in Cajamarca, Peru has been in operation there since the 90’s and has expanded to be the second largest gold mine in the world.  The Minewatch group of DJPC has provided accompaniment to GRUDFIDES, a local environmental organization based in Cajamarca, Peru to attempt to win protective measures for the environment and for the people affected by it.

Lynn Holland member of DJPC spoke about open-pit mining destruction to the environment, the devastation to sustenance agriculture and the threat to traditional indigenous practices that are common in a community affected by mining,”Whole mountains are destroyed obtaining metals that can’t even be seen with the naked eye.  The dirt has to be put through a very intensive chemical process.”

She points to the storage of waste intrinsic to the process which often involves the destruction of pristine lakes and the waste leakage that ensues:

Her sign read, “Newmont’s Gold equals dirty water.”  She has personally witnessed the operation of Newmont’s Yanacocha Mine and has also met the locals who report a contaminated environment leading to health disorders.  In addition to the health threats, locals also report the violence they have endured by national police and the private security tied to Newmont.  One case that DJPC is watching closely is the case of 2016 Environmental Gold Prize winner Maxima Chaupe whose land Newmont wants in order to expand gold mining operations.  The Chaupe family has undergone multiple serious assaults, destruction to their home, to their cultivation, and to their animals, the most recent attack occurring earlier this month.

The criminalization of dissent by those who oppose open-pit mining poses an additional threat.  In Honduras for example, Bertha Caceres, another Goldman Environmental Prize winner was killed in March of 2016.  Her work to protect the environment from open-pit mines led to multiple death threats against her and the fraudulent arrests she underwent while doing her work to halt or curtail mining operations.  One Honduran mine in Azacualpa operated by Aura Minerals is being fought by locals who told an international human rights delegation earlier this month that the company made promises of financial compensation, housing, and employment opportunities that the company didn’t keep.

Currently a bill introduced in Congress by Representative Hank Johnson, HR 5474 would cut military aid to Honduras that is said by activists who are familiar with Honduran government violence, would go a long way to curbing assassinations against environmentalists.

In Peru, GRUFIDES reports various acts of repression, sometimes by unknown sources, sometimes very public as in the case of military violence against protesters.  But members of GRUFIDES report more covert actions such as being followed, photographed, and having members’ offices and homes broken into.

Newmont has brought mining operations closer to home.  The Cripple Creek and Victor Mine owned by Newmont is located west of Colorado Springs, Colorado.  The corporation boasts that “the Cripple Creek gold deposits occur within a seven square mile (18 sq. km), 30 million year old, volcanic-intrusive complex that erupted and intruded through rocks that are over one billion years old.”

Kathryn Rodriguez is also a member of DJPC and said that in 2014 the group protested the Cripple Creek Mine after the group had attended a memorial service in Peru for those who had been assassinated by Newmont’s security forces especially in Celendin, Peru, “Mining is the one of the biggest contributors to global warming and we need to have less, not more.  In open-pit mining you have to dig up 60 tons of dirt to get one ounce of gold.  It takes a ton of water and so especially in other countries they don’t pay fair prices for the water compared to what the people do, and they contaminate the alpine lakes especially in places like Peru where people use those lakes for their drinking water and for their animals.”

Robin Jeri is from Peru and is working to oppose the Las Bambas mine near his homeland.  He told The Nation Report that he came to the capitol to show solidarity with Indigenous people, especially of Peru, Ecuador, Colombia, Bolivia, Brazil “that are suffering the brutal aggression of open-pit mining.  Near where I’m originally from at 4-5000 meters of altitude, Apurimac, the mining corporation MMG from China with funds from Australia and North America have taken over ancestral lands of my community, Chanca, of Yanahuara in the Chaluauacho province.  This exists through government corruption that has sold ancestral lands of campesinos.  One mayor who stood against this was assassinated.  The Peruvian government is persecuting leaders.  So instead of sentences of 25 years they are being sentenced to 35 years for defending their land.  This [landgrab] is being done without free, prior, and informed consent of the local leaders nor of the locals.  So here we see a confrontation of powers, state powers that have sold the land, and the economic power of this corporation MMG against the power of campesinos and an environmental organization who are being persecuted at this very moment.  Stop Las Bambas!”

Preston Enright, member of DJPC compares the industry of open-pit mining to the movie Avatar “where the acquisition of natural resources whether it’s Colombia or Indonesia, or even here in the US, places like West Virginia are being devastated by mining projects.”

According to the environmental group Earthworks, US jewelry sales in 2012 totaled $71.3 billion.  Worldwide jewelry accounts for about 43 percent of mine production and $4.4 billion is spent on jewelry for Valentine’s Day alone, which represents 20 percent of the chosen gift for Valentine’s Day.

Enright says, “We have options.  We can be more mindful of what were using, how we use it, how we extract it, and also funding options to material.  Do we really need so much jewelry?  I think the average ring creates tons of mining waste.  Maybe we should think about that investment.”

According to a press release, DJPC said that the organization will “continue to demand the stop to the proposed expansion of Yanacocha, Conga which is currently on hold but poses a threat as the newly elected president of Peru, Pedro Pablo Kuczynski, establishes new talks with representatives of Newmont to reinstate its operations in Celendin.  Preventing the construction of open-pit mines is imperative to stop further devastation to the communities’ precious water and land.  No to mines!  Yes to live!  Conga no Va!  Bambas no Va!” 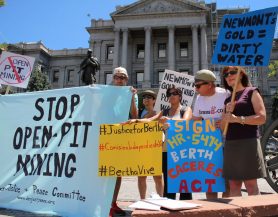 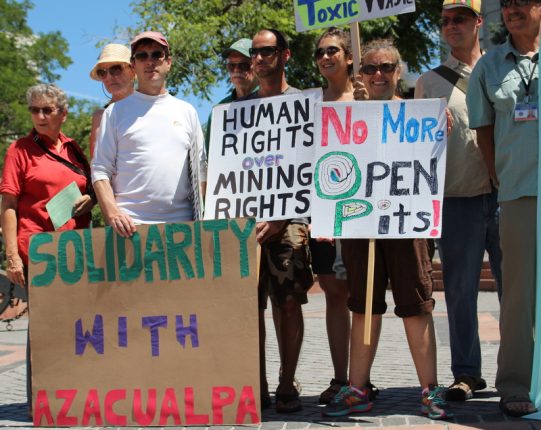