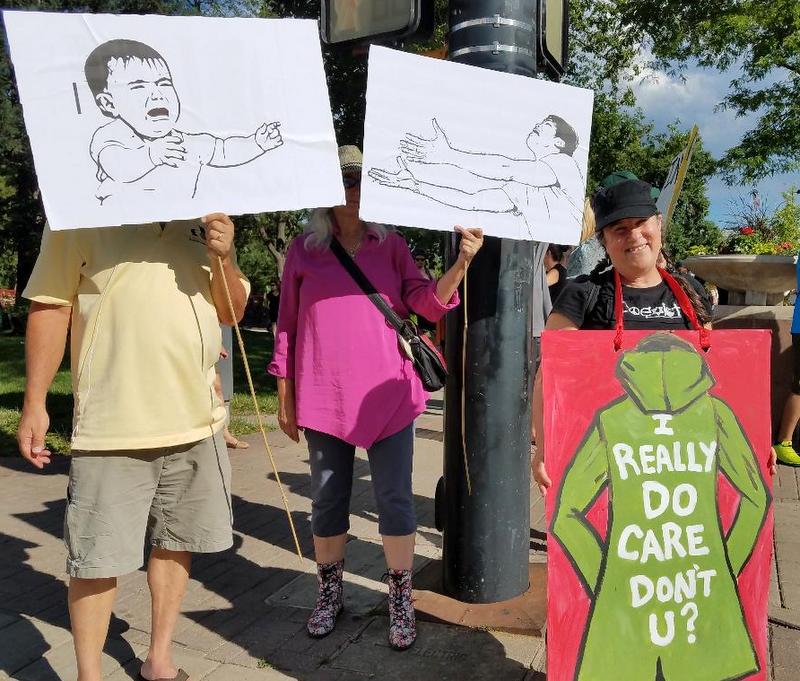 “We demand a permanent moratorium on family separation, reunification of all separated families, parole for all families pending adjudication of their asylum claims, and asylum process in compliance with international law.”

The organizing message was displayed in different forms along streets in Denver, and other cities in Colorado on Friday afternoon to protest President Donald Trump’s recently announced “Zero Tolerance Policy” that sought to arrest all crossing the Mexican/US border, whether legally or illegally.  Trump later reneged on the policy that separated children from their parents, but he announced what many say is an equally troubling policy:  that families would be jailed together.

Although family separation has been a regular occurrence in previous administrations, backlash against this practice took hold after mass circulation of children incarcerated in cages surfaced, along with the release of audio footage of traumatized children being separated from their parents.

Footage from inside detention facilities also sparked international outrage.   Outside of the US embassy in Santiago, Chile on Friday, protesters spoke out against US treatment of children.

“I really think that the idea of putting kids in a detainment facility just for crossing the border is garbage,” Diego Cordero who is ten years old held his sign in Boulder that read, “Put Trump in here for a day and see how he likes it.”  The sign depicted a jail and image of Trump behind bars. “Our president is not doing a good job of keeping the people across the border safe.”

The Boulder protest was one of a couple of dozen held across the state, and drew around 250.

Several children protested and relayed a similar sentiment as each other.  At the Boulder protest, Celeste Haverstick was another youth who said that she was coming home from a camping trip when her phone buzzed in a news alert about immigrant children being handcuffed, and drugged, “It’s not right that we’ve lost all our values.  We’ve lost everything that makes us America.  We’ve lost everything that makes us the kind, and the welcome place that we are.  I think that’s just wrong.”  Her sign read, “America, these are the moments when we are judged by the content of our character.”

Jose Beteta, Executive Director of the Latino Chamber of Commerce spoke to a crowd gathered at Boulder’s Central Park bandshell, and later told The Nation Report and described the Boulder community as one with strength to overcome the challenges that meet the people, 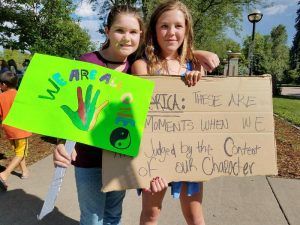 “When I heard abut this, I was furious. My sign says ‘We are one’ and the hand symbol is symbolizing that we are all one, and it’s not right to just take away children. The thing that bothers me most, is people are just taking away innocent children, and they’re taking them away from their families, and they’re torturing them, and they’re abusing them.  It just really makes me mad and upset to see this going on.”

In Longmont, about 20 lined up early on Main Street including Savannah Ortega whose sign read, “Amber Alert, ICE taking children,” and “#No More Lost Children.”  Ortega came to the protest with her children who also held signs,  “We want the kids to be reunited with their families.  Everyone thinks so.  We all want to unite them together.  The kids being in the camps, it’s just not fair.  Hearing the kids crying, wanting to be with their moms and dads, it’s heartbreaking and that shouldn’t happen.”

When she first heard of the most recent news of family separation at the border she said she first thought of her own children, “What went through my mind was my kids.  I don’t know what I would do without my kids if someone took away my kids.  I would go crazy.  I would lose it.  They mean the world to me.  And that’s why I brought them here today to the protest, because we want the kids to be back with their families.”

Gaythia Weis also stood on Main Street in Longmont, “I think we should be way more supportive of people trying to escape horrible problems at home, and that they should be appropriately evaluated for refugee status, and during that time, families should not be separated.  That is just evil.”

Weis said her husband immigrated as a toddler, “He didn’t have any say in that decision, or what paperwork his parents filled out or didn’t fill out to come here.  Immigrants have made this country strong.”

Multiple honks from passersby energized both protests.  In Boulder, several wore versions of a jacket that First Lady Melania Trump wore Thursday on her way to observe detained migrant children held in McAllen, Texas that read, “I REALLY DON’T CARE DO U?”

But protesters had their own messages to relay back to the White House.

Diego Cordero said that after the initial shock of hearing about incarcerated children that he would tell President Trump to “Shut down all the GEO facilities and to quit being president and they should let someone else take over for him.”

GEO contracts with the federal government to detain immigrants for a profit.  Years of protests have taken place outside of the GEO facility in Aurora, Colorado. 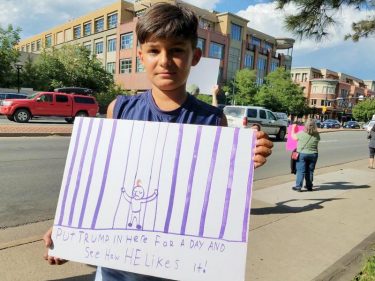 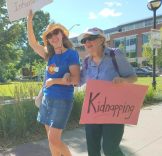 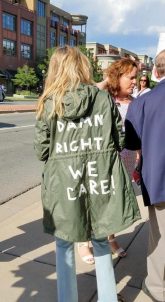 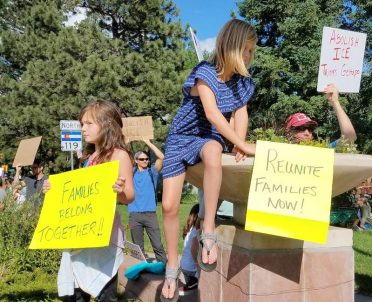 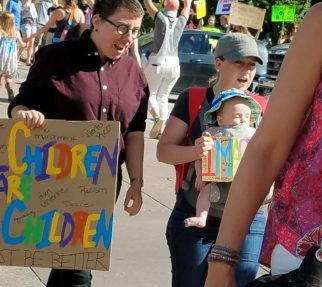 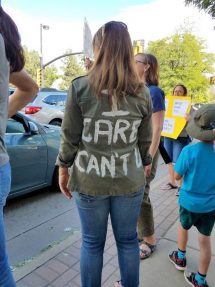 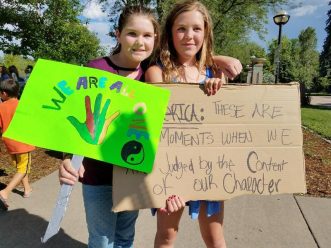 When I heard abut this, I was like furious, and so I decided that I really want to speak for the voiceless. my sign says, “We are one.” and the hand symbol is symbolizing that we are all one, and it’s not right to just take away children. and it’s not right to do the kind of stuff that people are doing these days. the ting that bothers me most, is people are just taking away innocent children, and they’re taking them away from their families, and theyre torturing them, and they’re abusing them. and it just really makes me mad and upset to see this going on. 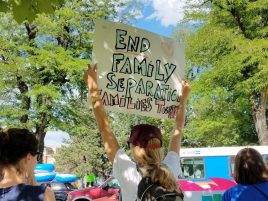 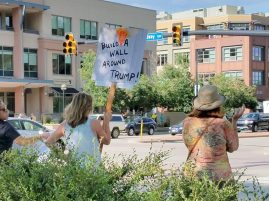 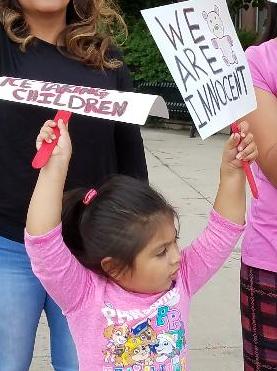 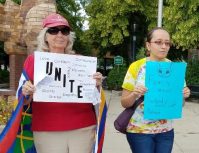