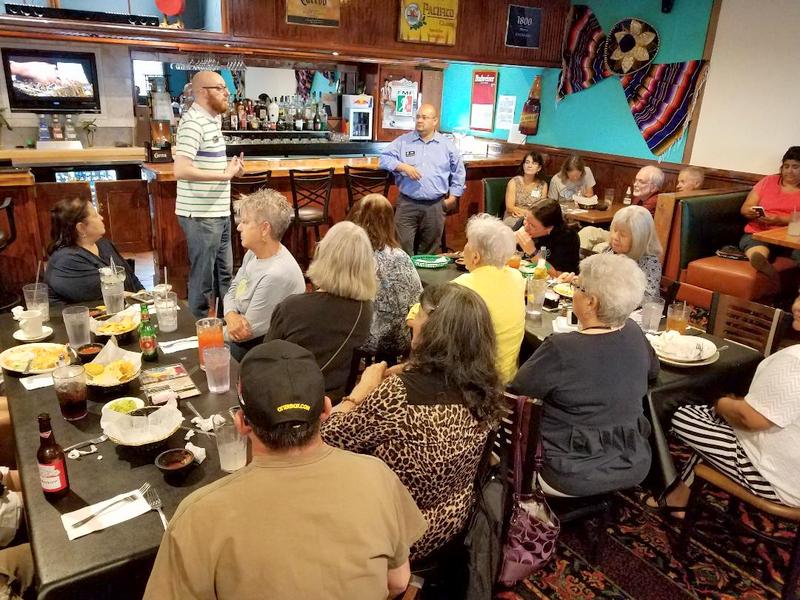 “This seat changes with this campaign.  We start taking things back for the people, because bottom line, the Attorney General’s office is the people’s lawyer.  And I plan on turning this seat back to you.”

Longtime civil rights attorney and advocate, Representative Joe Salazar spoke to Longmont voters on Thursday with the support of his colleagues Representatives Mike Foote and Jonathan Singer.  Singer introduced Salazar saying, “Joe has been fighting for the past several years to stop federal intervention and to make sure that our state government is not complicit with our federal government when they do what is wrong.”

A former University of Colorado, Boulder undergraduate student, Salazar referred back to his college experience in Boulder when he was thrown on top of a police car and frisked by Boulder Police.  At the time he was on the committee charged with choosing the next Chief of Police, “There are two other Attorney General candidates, and neither one of them would have the perspective of what it’s like being thrown on top of a cop car because of the color or your skin.”

Salazar credits that moment to the realization of political power along with activism that landed him where he is today.  After communicating that he would be interviewing and selecting the future supervisor of the police officers, “It scared them, and then they left us alone.”

These experiences led to law school at the University of Denver during which time he clerked at the Colorado Attorney General’s office in the Tort and Employment Units helping prepare for litigation.  Upon graduation, he began his own practice as a civil rights attorney along with serving as a defense counsel for poor kids in Adams County.

“And it was through all of these experiences that led me to the next adventure which was to fight for immigrant rights in 2006 when Colorado, with both chambers being Democrat-held passed the most anti-immigrant legislation in the United States at the time.”

The onset of racial profiling following these legislative measures led Salazar to seek a House seat in order begin the work to repeal the bills which he did.  His work went even further when he was a voice behind the ASSET bill that provides in-state tuition for undocumented students and a Drivers Licenses for All bill that passed that same year.

In 2017, and 2018, Salazar sponsored bills that would honor Indigenous peoples on what the state now marks as Columbus Day.  The bills did not pass, but his colleague Representative Adrienne Benavidez ran the bill this year in the House.  “Like the American Indian community. Before I got elected as a state representative, there was hardly anyone fighting for the American Indian community.  And I went in, the gloves came off and everything.” 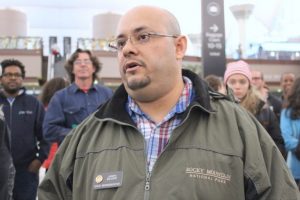 Joe Salazar appears at Denver International Airport in January 2017 along with hundreds of protesters against Donald Trump’s executive order to ban travelers from seven Muslim majority countries. Here Salazar was convincing the airport police not to arrest protesters.

Salazar showed up at Denver International Airport to defend against Donald Trump’s executive order banning travelers from seven Muslim majority countries at the time.  Weeks later he along with colleagues Representatives Daneya Esgar introduced the Ralph Carr Freedom Defense Act in an attempt to protect targeted communities from oppressive acts by the federal government, “We were fighting for the Muslim community.  We were fighting against the hatred that we saw with hate groups rising up, with the white nationalists groups, the KKK, and the skinheads.  We started fighting back.  And that’s what we need in an Attorney General.” 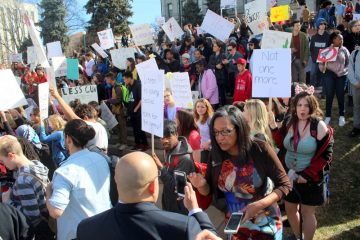 In March of 2018 Joe Salazar speaks to supporters of the Right to Rest Act which he and Representative Jovan Melton introduced in 2018. The bill failed in committee.

Salazar speaks to supporters of an Indigenous Peoples’ Day bill.

Those opposed to a 10-acre hydraulic fracturing site near Silver Creek Elementary protest at Big Dry Creek Open Space in Thornton in May of 2016 with the goal of stopping the proposal expected to be the largest in the nation at the time. 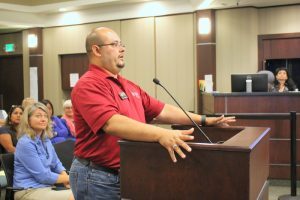 In August 2017, Salazar speaks in support of those arrested at Senator Cory Gardner’s office while attempting to protect their healthcare.

Representative Joe Salazar speaks on the House floor in support of a bill that would eliminate bond requirements for misdemeanor offenses.

Salazar joins a “Four Directions” march and rally in Septemberr 2016 in support of those holding down Standing Rock in North Dakota in opposition to the Dakota Access Pipeline.

Salazar speaks to a rally on Tax Day 2017 calling for President Donald Trump to release his taxes. 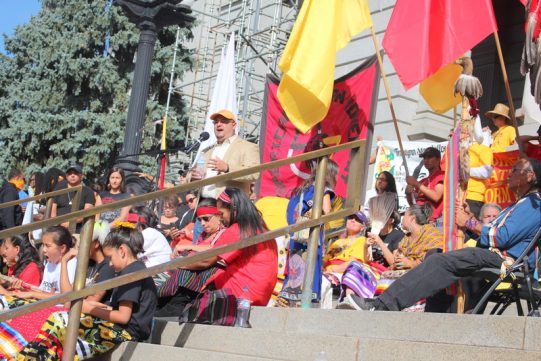 Salazar tells water protectors that they are on the right side of history by defending life and water at the state capitol in October 2016.
Please follow and like us: