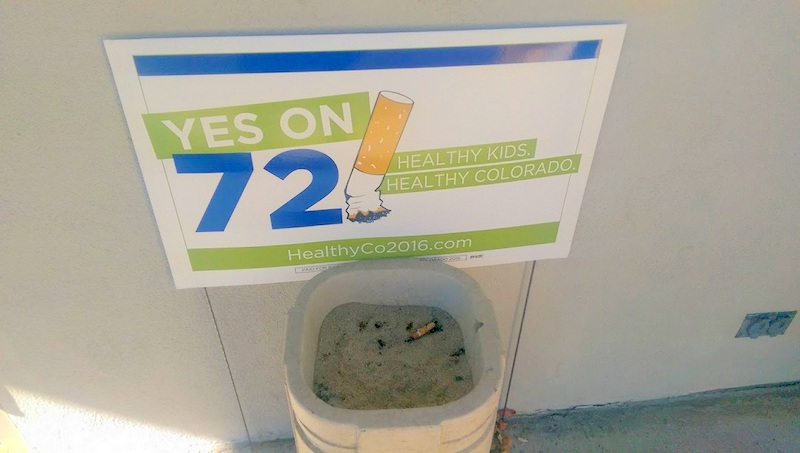 “Every taxpayer in the country is funding our healthcare on the Department of Defense side and the VA side so to think that an outside entity can come in, we don’t even smoke, maintain their market share, cause people to get sick, and their eminent death in most cases without any concern to all of us and what were paying in to support healthcare on both sides is incredulous.  It is unpatriotic.  And it should be illegal.”

Leanne Wheeler, a US Air Force veteran once deployed to Desert Storm, challenged the Philip Morris tobacco company today and the $17 million the company has spent in Colorado to dissuade voters away from Amendment 72.  If passed, Amendment 72 will increase the cigarette tax by $1.75 a pack and the tobacco tax on products such as cigars and chewing tobacco by 22%.  The collected funds would be distributed to increased healthcare for Coloradans with lung diseases, and to cessation and education programs about the dangers of smoking.  Mental and healthcare for Colorado’s 500,000 veterans would also receive the funding.

Today at a “stand down” organized by United Veterans Committee at the American Legion Post , Wheeler along with other Colorado veterans talked about their support for the Amendment and challenged Philip Morris’ claim that veterans are a “special interest group.”

“We take exception to being referred to as a special interest group.  That is the large underlying context in all of the negative messaging coming from Phillip Morris also known as Altria.  We as veterans, and we number 450,000  veterans here in the state of Colorado, five different eras of war, and our families, to refer to us as special interest groups because we as a group will benefit from health and well-being programs funded by these tax dollars, actually it’s just unpatriotic quite frankly.  And offensive.   And to assert that we are a special interest group when we are concerned with cessation prevention, research, making sure that our brothers and sisters of arms who are suffering from tobacco-related diseases get the healthcare needed.  All of that by definition doesn’t make us a special interest group.  What it does is make us concerned, compassionate citizens for our brothers and sisters of arms here in the state of Colorado.”

Over 100 organizations have voiced support for Amendment 72 including Children’s Hospital Colorado, the American Heart Association/American Stroke Association, and the American Lung Association.  The United Veterans Committee, a nonprofit coalition of 50 chartered and federally recognized veterans service organizations in Colorado said that they organized the event with the intention of clearing any misconceptions of their support for the Amendment.

Of the $315 million expected to be collected by the tax in the first year, 14% or $48 million will go to underfunded mental and healthcare for veterans.  Veterans in need of mental health and substance abuse care would benefit from increased funding to services for suicide prevention, treating PTSD, depression and anxiety disorders.  Other veteran’s organizations in support include Disabled American Veterans, Mile High Military Officers Association of America, and Rocky Mountain Navy.

Education programs to reduce smoking are also proposed in Amendment 72.  It’s estimated that kids smoke 7 million packs of cigarettes a year.  The Centers for Disease Control and Prevention recommendations for tobacco education for both youth and adults led to the $54 million of the revenue collected from the tax to go education, cessation, and prevention.

Because of the impact to the profit of big tobacco, Wheeler responded to the campaign of Philip Morris,

“So they are motivated that people keep smoking without any concern for their health and well-being at all.”