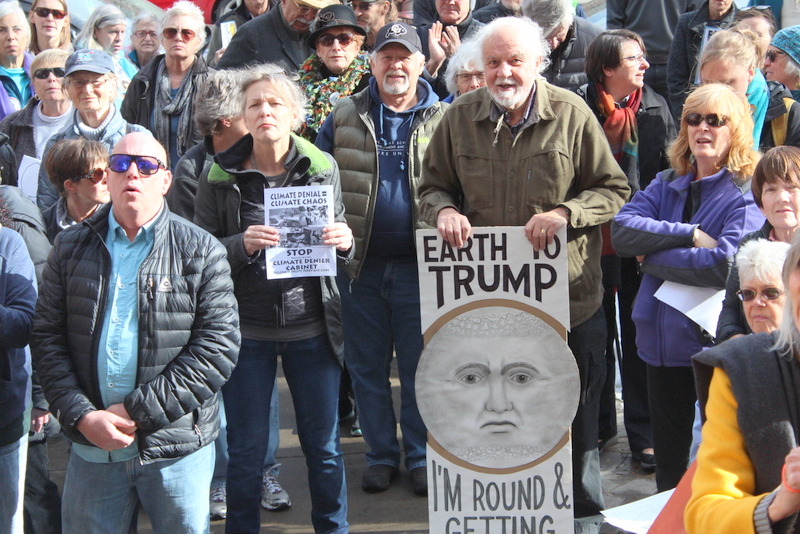 US Senators Michael Bennett and Cory Gardner on Monday received a visit from over 100 constituents who want the two to block President-Elect Donald Trump’s cabinet picks who have demonstrated a denial of climate science.

The rally was part of a nationwide action taking place in all 50 states in the country.

In his professional experience, Scott Pruitt has allied with the fossil fuel industry and before his selection for this appointment Pruitt led a lawsuit against the EPA to block President Obama’s Clean Power Plan.  He has suggested undoing the Clean Power Plan and deregulating carbon emissions.  He is quoted as having said that that climate change is “subject to considerable debate.”

Objections to Rex Tillerson as the CEO of ExxonMobile for Secretary of State point to conflicts of interest raised by the public between his past as a profit-maker for one of the largest global polluters and his lack of experience in public service or international diplomacy.  Tillerson has refused to submit his tax returns to the Judiciary Committee.

Rick Perry for Energy Secretary elicited disbelief when in a public conference, he couldn’t remember that the Department of Energy existed.   During his campaign for the office of the US President, he called for the elimination of the DOE.  He earlier sat on the board of Energy Transfer Partners, the company constructing the Dakota Access Pipeline (DAPL).

US Representative Ryan Zinke as possible Secretary of the Interior has drawn criticism because of his switch from a 2010 position he took in support of the existence of climate change.  Now he denies evidence in climate change science.

As a US Representative from Montana, Zinke held sessions to hear a bill that would challenge the Antiquities Act, a measure that protects natural and historic sites such as the Missouri River Breaks and the Little Bighorn Battlefield in Montana.

In 2016 Zinke voted for a bill that would allow roads, dams, and commercial logging in designated wilderness areas.  He drew criticism in 2014 for accepting a donation from a white supremacist Council of Conservative Citizens, an organization followed by convicted mass murderer Dylann Roof.  When the donation was made public, he turned it over to “charity,” but drew similar criticism for Montana House candidate Taylor Rose for ties to a white supremacist organization, Youth for Western Civilization whom he supported.

Micah Parkin, Colorado Director for the environmental organization 350.org said in a press release why Bennett and Gardner were targeted.  Senator Bennett has not taken a public position on his support or opposition to Trump’s Cabinet picks.

Outside of Senator Gardner’s office building, Parkin raised the profile of three national laboratories that Colorado hosts,  “We have NREL [National Renewable Energy Laboratory].  We have NCAR [National Center for Atmospheric Research].  We have NOAA [National Oceanic and Atmospheric Administration].  A lot of these scientists study climate change, and are on the Intergovernmental Panel on Climate Change (IPCC).  That organization has said time and again that climate change is indeed real.  It’s happening.  And it’s caused primarily by the burning of fossil fuels.  So to deny the basic science, which over 97% of climate scientists agree on is ridiculous at this point in history and it’s putting us and our children in jeopardy.”

The Senators were not in their offices to receive their constituents.  Senator Bennett’s staff said that they would relay the information to him, a common protocol used to receive groups in his office.  Staff in the lobby of Senator Gardner’s allowed 6 people to enter his office and told those six that they were not able to speak about his position on Trump’s selections.

But at a 2014 Action 22 campaign event when Gardner ran for reelection to the State House, then Representative Gardner refused to answer Parkin’s question about his support for federal subsidies to the fossil fuel industry.  Instead, Gardner turns away from Parkin thereby avoiding the question.

One participant, “Carolyn” was holding a sign that read, “ETHICS MATTER” and told The Nation Report that she was there opposing “climate deniers” and challenged the appointments of Cabinet members without proper vetting, “the fact that they don’t feel that they should or that they need to fill out all of the requisite paperwork so that they can be vetted properly is wrong.”  She pointed to the inability to identify climate deniers without proper vetting, “You’re not even going to find that out except if they fill out all the forms so we know that they’re beholden to the oil companies.  They need to put that in writing because that’s what they are.” 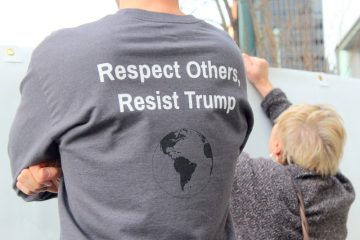 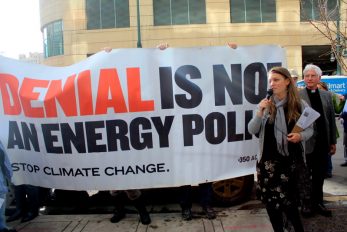 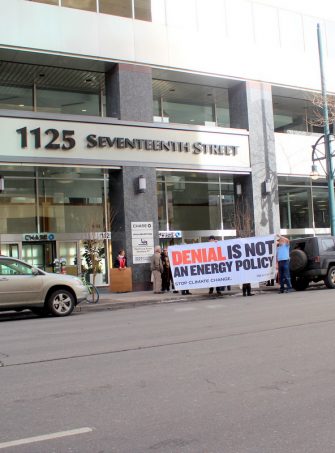 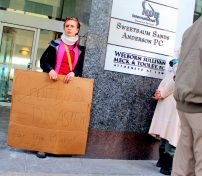