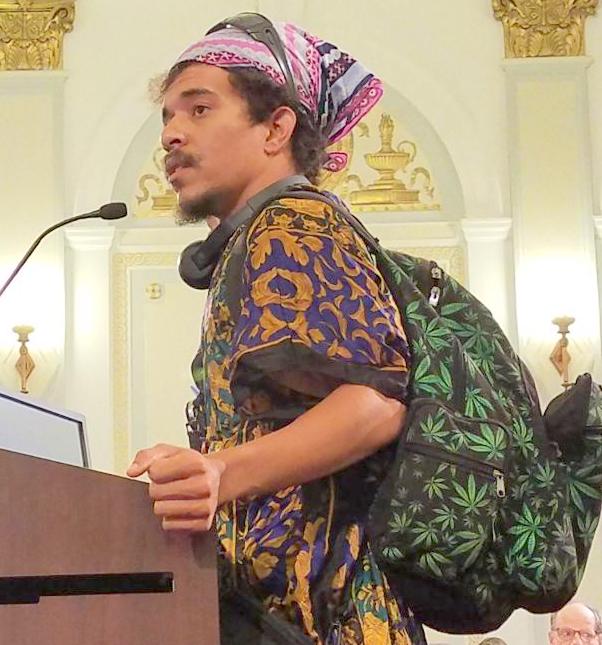 Boulderite Sammie Lawrence IV speaks to Denver City Council about restrictions at employment locations regarding medical marijuana use. (all photos: The Nation
Report)

Editors note:  In July of 2016 Denver City Council began hearing its first general public comment session.  Members of the public were allowed to speak for three minutes on city matters of choice, but only during the first Monday meeting of each month.  Prior to this new procedure- approved May 23, 2016 – the public was only allowed to comment on agenda items.

On September 18, 2017, the Council announced a second opportunity to participate in public comment, the third Monday of the month.

Because this public comment session is not televised nor recorded, we at The Nation Report felt it important to document for readers, issues that were most raised by members of the public that follow our mission statement.

Six of the fourteen speakers who signed up to speak at the July 9 Denver City Council meeting, wanted Council to intervene at an upcoming Denver Landmark Preservation Commission meeting where a vote regarding changes to the structure of Red Rocks Amphitheater is expected to take place.  The proposal could change the integrity of the venue near Morrison, Colorado.

On July 24, the Commission will once again take on the issue of adding railing to planter boxes, and adding paving to the venue.  Proposed changes would endanger existing topiary, junipers that were planted as part of the original construction.

Representatives of the group Friends of Red Rocks formed in 1999, following a 1998 similar proposal which members say would also have threatened the intent of the architect to maintain the original beauty of the area. 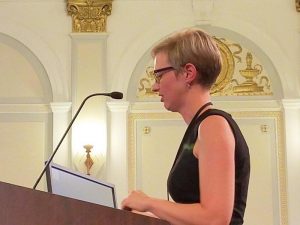 “We don’t have to violate the architectural history and the integrity of the park.  We can preserve the boxes back to their original purpose as planter boxes.  The railings are completely opposite to the original vision of the amphitheater,” Amy Harris, member of Friends of Red Rocks told City Council.

Dianne Thiel, member of Denver Homeless Out Loud spoke in protest of a proposal by the Denver Clerk to increase the number of signatures required to submit citizen ballot initiatives.

The proposal is scheduled to come up before Denver’s Finance and Governance Committee next week.  Currently 4726 signatures are needed, reflective of those who voted in the most recent mayoral race.  Six months are allowed to collect signatures.  The proposal seeks to raise that number to over 9000 signatures. 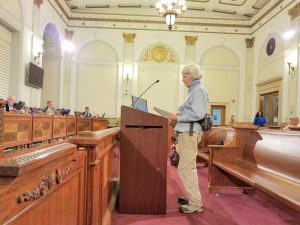 “For volunteer signature gathering campaigns like ours with Denver Homeless Out Loud done by grassroots, community based groups, this change would be very harmful and likely prevent them/us from gathering enough signatures to qualify an initiated ordinance for the ballot,” Thiel told the Council.

“We work extremely hard in very high temperatures, close to 100 degrees to get signatures and we are not paid for our work,” Thiel compared a grassroots campaign in comparison to a corporate financed campaign that can fund paid signature gatherers, “I suggest that the city should protect, not obstruct the right of grassroots, community based groups to qualify ordinances for the municipal ballot.  [This is] corporate interests versus the people.”

Terese Howard, also of Denver Homeless Out Loud reported on a sweep by Denver Police that she witnessed at the “triangle” near Denver Samaritan House.  Howard described a scene of Denver Public Works discarding into trash bins the personal belongings of those living on the street. 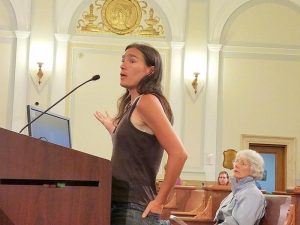 Currently the City of Denver is a respondent in a high profile class action lawsuit challenging the trashing of personal possessions by the city that cites Fourth Amendment issues.  Last year Mayor Michael Hancock issued a statement affirming that the city would no longer engage in the trashing of citizens’ belongings but Howard complained that the statement was carefully worded to only include a narrow set of conditions.

“And the city has continued to claim that this process is one where they take folks property and they put it into storage, and they have the opportunity to retrieve that property,” Howard described to council, “And instead of taking people’s property and putting them into storage bins, they threw it directly in the trash bin.  The Public Works people picked up a person’s personal shopping cart filled with their backpacks and sleeping gear, tents, tarps, survival needs and threw it directly in the trash bin along with multiple people’s bikes.  One of my friends had to go and rescue a friend’s bike from being stolen.”

Howard testified that the trashing of sleeping mats for people with spinal ailments who rest on sidewalks, added to the health threats that the city is imposing on disabled folks.

Howard then described a separate incident where two people who were sleeping in a public space were awakened by Denver Police and instructed to move,  “This is one of the only areas in the shade that they could access and lay down to rest.  It’s roughly 100 degrees these days.”

Denver Homeless Out Loud is currently collecting signatures for the Right to Survive Initiative that seeks to prevent police from instructing people to move to another location.

“So this practice of continually moving folks on is destructive toward people’s lives and I ask you guys as council members to take action, ” Howard concluded in her remarks.

“We need a flat tax on marijuana.  This idea comes from the folks who have been selling weed 50 years before you all legalized it.  So they’re going to show you how to do this.”

Seku suggested a 5% flat tax, “Then what you have, is you create a 3-fold, energy boosting, capital raising mechanism to build over 1 billion dollars worth of housing over the next ten years that people can rent that’s affordable.”

Seku complained that although the number of people currently in prison for marijuana use and distribution that is now legal in Colorado, is majority-owned by what he called a “marijuana monopoly cartel.”  He described an industry mostly owned by white males, “Right now you got a marijuana monopoly cartel, nothing but white boys who never, ever, ever went to jail amiss the people who created this culture are now languishing in jail today.”

As an additional solution to the Denver’s housing crisis, Seku also includes marijuana reform, “What we want to do is make the ownership of these dispensaries across the board where poor people can get in it and be in the business of the industry, so that they can pay the rent, they can pay the mortgage on the housing.”

Council’s last speaker traveled from Boulder to describe a situation that he said threatens his health.  Sammie Lawrence IV moved to Colorado from California with a  grave medical condition that he suggested was relieved with marijuana use.  Lawrence said he recently learned of regulations that prevent people from carrying marijuana on the premises of employment locations.

Lawrence who last year experienced homelessness in Boulder is now employed, yet has run into the challenge of choosing between working and alleviating his condition, “I have to work.  This policy is, it literally stops me from being able to work and build a foundation that I came out here to build two years ago, August 16th.”

Lawrence said he seeks stabilization and wants to contribute, but may be prevented from realizing this goal, “As a severely disabled, mentally handicapped man who could literally die from my migraines at any moment, there is the relative issue of this wonderful state, safe designated areas for medicinal use, not just for people who are severely disabled, but also those who are homeless, cause I was homeless.  And there are very serious people who have opportunities just like me to get stabilized and provide for the community should we allow them to.”

To sign up to speak for the public comment session, you can email Legislative Services at dencc@denvergov.org, or call 720-337-2000, or sign up in person in Room 451 of the City and County Building.  The sign-up period begins at 12 p.m. on the Friday before the first and third scheduled council meeting of every month.