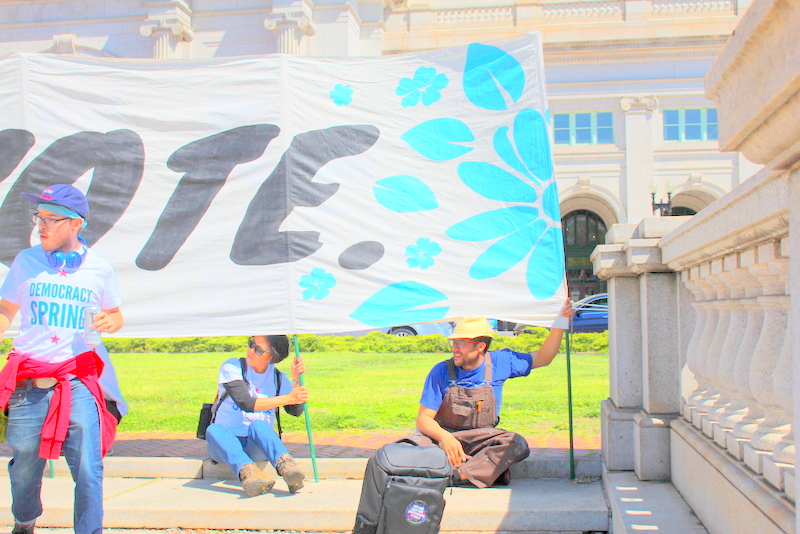 Boulder Judge Judith L. LaBuda sentenced social justice activist Thomas Downs to 40 days in jail on Friday after a December conviction for resisting arrest and obstruction.  Downs was acquitted of second and third degree assault on a police officer that originated with a March 27, 2016 traffic stop.

Community members crowded the courtroom including friends, relatives, and other community activists.

At the sentencing hearing Downs, who has no prior convictions, refused the District Attorney’s offer of probation, and opted for straight jail time.  He cited what he said could be a high risk situation given his experience with people he knew who were caught up in the probation system.  Downs said that he preferred spending time in jail where his assigned obligation would be completed upon release.  LaBuda explained to Downs that he would probably be released after 20 days due to overcrowding in the Boulder County Jail.

Last spring Downs and his then fiancee Cynthia Beard were stopped by Boulder Police for broken headlights.  Beard was accused of driving under the influence although she explained to police that she had not been drinking according to body cam video shown in court.  She was subsequently arrested.  Downs was arrested after he exited the car to speak to officers.  Video evidence played during the trial showed Downs exiting his vehicle and placing his hands on the hood of the police vehicle.  Downs said that he attempted to keep his hands visible to officers, officers testified that they perceived a threat.

John Pineau, legal counsel for Downs told The Nation Report following sentencing that the public can expect to see similar tactics in the future, “Given the tactics and mood of the country, it would be naive to think we’re not going to see personal attacks and political attacks on people for their politics.”

Drawing the attention of LaBuda in the Pre-Sentencing Investigation Report (PRI) were the assertions of the prosecution to portray Downs as a drunk, and as “angry” and “violent” and in need of anger management therapy, and alcohol abuse classes.

One courtroom observer responded to the sentence, but said he didn’t wish to be identified for fear of retaliation for his work, “It sets a little bit of a precedent in terms of interactions with police that I’m trying to keep and eye on.  As a concerned community member, I’m definitely worried about police brutality.  I’m definitely worried about charges that are trumped up and/or are brought up multiply to get convictions from people who don’t deserve them.  I feel due process was served but I don’t feel like humanity was truly recognized and honored.”

The PRI also pointed to marijuana use by Downs despite that personal use was legalized in Colorado in 2012.  Evan Ravitz, also a community organizer responded, “Our prison industrial complex matches proportionately that of the US, the most incarcerated country in the world in spite of Boulder being a very safe place.  It’s amazing that in ‘kind’ Boulder that the stern father Republican paradigm should be imposed in so many ways instead of the nurturing mother.”

Community members have expressed that they intend to take up with District Attorney Stan Garnett the issue of First Amendment activity being used as an issue that necessitates defense in court.  Pineau said that the tactic makes his job even harder, ”

“I entirely respect people who are open about their politics and loud about their politics because that’s the American way.   As a defense attorney, that makes me nervous though when one of those people is my client and those things are used against him.  As a citizen I want people to be able to express all their views openly in a public forum written in bright red letters when it’s necessary particularly on issues that involve life and death or continuance of the republic.  It’s just that when we get down to the actual case in court, it certainly cost me extra gray hair to have to defend against the use of those statements against my client.  So all those things become a liability when it’s Facebook postings and newspaper comments and internet comments and that’s regrettable and I think it’s unconstitutional to do that.  And I think it’s reprehensible to do that.  It’s not surprising that the new regime has led to this type of tactic.”

Ravitz who just earlier in the week spoke to Boulder City Council about policing in Boulder said, “The actions of police kind of drumming up business or teaching an activist a lesson or whatever was in their heads, is an example of creating problems that aren’t there.  Boulder is as mean as it can get away with.  I wish it would stop.”

Downs said he plans to “bear witness” while incarcerated and to write a lot of poetry.  He intends to appeal his convictions.