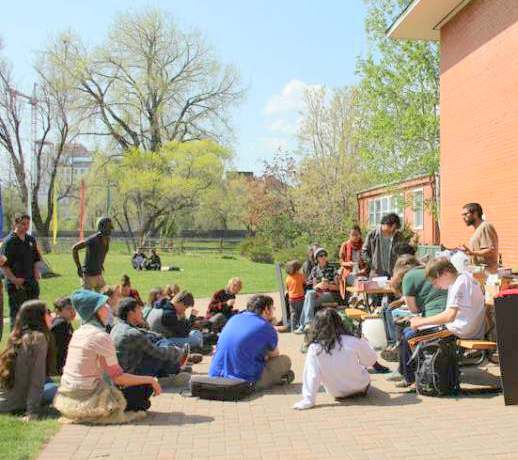 Tom Downs (r) leads a teach-in at Naropa University during a 2015 student occupation of the school that called for more representation of people of color in administrative, faculty, and student positions. (all photos: The Nation Report)

Boulder, Colorado resident Tom Downs who local environmental advocates know as standing up for clean air and water, and others in the Black Lives Matter Movement know as working for racial justice will go to trial on Monday facing charges of second-degree assault on a police officer, obstructing a police officer, and resisting arrest.  He  denies all charges and will be represented by attorney John Pineau who has defended other cases where police conduct has been an issue, and successfully defended Boulder activist Joe Tolbert who is African American and who was one of only two people – both people of color – arrested at a 2014 blockade of US36 against police brutality.

Tom Downs (upper left) leads a sit-in during “Flood the System” events on the Pearl Street Mall in 2015.

Downs and his then fiancee – now wife – Dr. Cynthia Beard, also a community advocate, were leaving a community meeting on March 27, 2016 when they were pulled over by police for no headlights.  His fiancee reported having just changed her headlights and that at the time she was stopped by police, did not realize that both headlights were out

After the traffic stop of March 27 court documents say she was given sobriety testing and was arrested on suspicion of DUI.  Her charges were later dropped.  The arrest drew questions about police conduct which she says is evident in body cam footage that contributed to her charges being dropped. 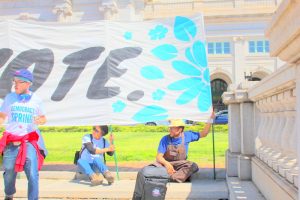 Tom Downs (r) oversaw much of the artwork used in actions at Democracy Spring events in Washington, DC in April 2016.

Dash cam footage from one of three police cars that should have recorded the incident was not turned over to the defense yet footage from the other two police cars on the scene were, an issue raised in an evidentiary hearing held earlier this summer.  “Boulder Police Department staff have confirmed to the District Attorney and the defense that dash cam for Car 2 was in working order and automatically recorded everything,” according to a Motion for Specific Discovery court document filed earlier this year.

Footage from this car that was parked behind the arrest of Downs (Car 2) was subpoenaed this past summer which the defense say would clear Downs, “Directly in front of Car 2, in full view of the Car 2 dash cam, the three officers and Downs fall in a pile on the pavement.  Body cam video shows Downs motionless, while officers yell ‘Stop resisting!'”

Morey Bean, a local forensic architect and member of Boulder Rights Watch and Boulder Coalition and Alliance on Race told The Nation Report that he expects to be in court to support Downs, “Tom is a talented Boulder artist and activist that does us proud as someone who is committed to building a just community in the face of many injustices, and fighting for what is right, even if it might be trying to defend his wonderful wife from the abuses of an unjust arrest.”