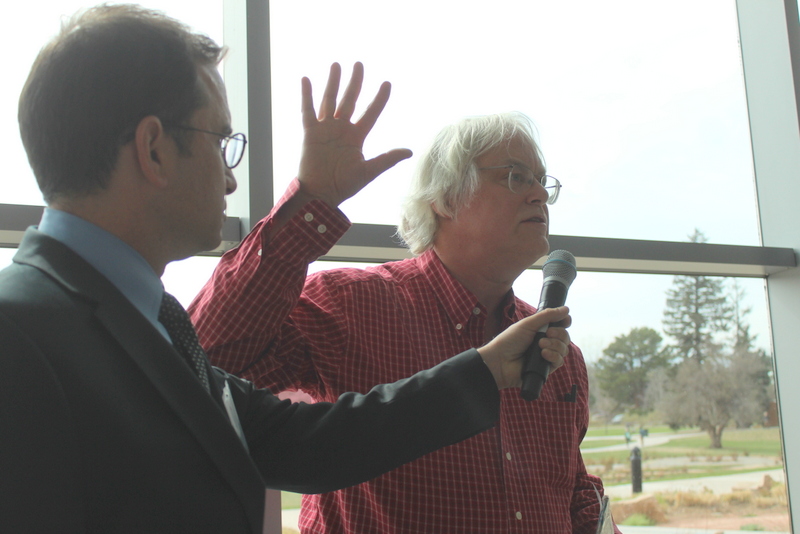 Matt Nicodemus of Boulder, Colorado, a draft resister since 1978, speaks against the draft on Thursday to the National Commission on Military, National, and Public Service (photo: The Nation Report)

The opening of all military assignments to women in December 2015 eliminated the basis in military policy for requiring men but not women to register with the Selective Service System for a possible draft.  If Congress does nothing, pending court cases are likely to produce a ruling that male-only draft registration is unconstitutional.

Congress has thus been forced to consider whether to extend draft registration to women as well as men, or to end it for all.

In 2016, Representatives Jared Polis (D-Boulder) and Mike Coffman (R-Aurora) introduced legislation to end draft registration, abolish the Selective Service System, and restore eligibility for Federal jobs, student aid, and other government programs to people who haven’t registered for the draft.  The Denver Post editorialized, “It’s time to abolish the Selective Service and end the draft.”

Instead, Congress punted the question into the Trump Administration by creating a commission to study the issue and report back to Congress and the President by October 2020.

That national commission will be in Denver April 19th for the second of its open-mic public hearings.

We’re here to point out that the Emperor has no clothes:  Draft registration has failed.  Widespread noncompliance has rendered it unenforceable.  Any attempt at conscription would meet the same fate.

In the years after draft registration was reinstated in 1980, we worked as organizers with the National Resistance Committee and as co-editors of Resistance News, the national journal of resistance to draft registration.  We publicly refused to register and encouraged others to join us in resistance.  Hundreds of thousands at first, and millions over the decades to follow, did so.

Faced with far greater noncompliance that it had anticipated, the government tried to scare  young men into registering by prosecuting a handful of vocal nonregistrants.  One of us (Hasbrouck) was convicted of refusal to register and served 4 1/2  months in a Federal Prison Camp in 1983-1984.

But show trials backfired.  They made clear that there was safety in numbers and that only those who spoke up could be prosecuted.  In 1988, after only 20 nonregistrants had been indicted, the Department of Justice gave up on trying to enforce the registration requirement.

Young men today have to register in order to be eligible for student aid and some other government programs, including drivers’ licenses in some states including Colorado (although not others, including California).  But there’s not attempt to verify addresses.  Men are supposed to tell the Selective Service System every time they move until they are 26, but almost nobody does.  The only audit of the database, in 1982, found that 20 to 40 percent of the addresses were already outdated.

Most of the people subject to draft registration have violated the law, and most induction notices would end up in the dead letter office.  Noncompliance had made the registration database useless as the basis for a draft.  Bernard Rostker, Director of the Selective Service System from 1979-1981, told an interviewer in December 2017, “It’s a list that I’m sure the courts would throw out immediately because it’s not accurate.”

Draft registration has continued only because there’s been no face-saving way for the government to admit that its power to conscript is constrained by the willingness of potential draftees to submit.

The Commission is also supposed to report on “the feasibility…of modifying the military selective service process in order to obtain…individuals with…medical, dental, and nursing skills, language skills, cyber skills, and science, technology, engineering, and mathematics (STEM) skills…without regard to age or sex.  But it’s absurdly naive to think that women or older health and IT workers would be more willing to submit to conscription than young men have been.

The commission should report to Congress and the President that, whether of not they agree with or understand the reasons for our resistance, a draft is not feasible and draft registration should be ended.

(members of the War Resisters League; public nonregistrants for the draft; former co-editors of Resistance News and organizers with the National Resistance Committee)