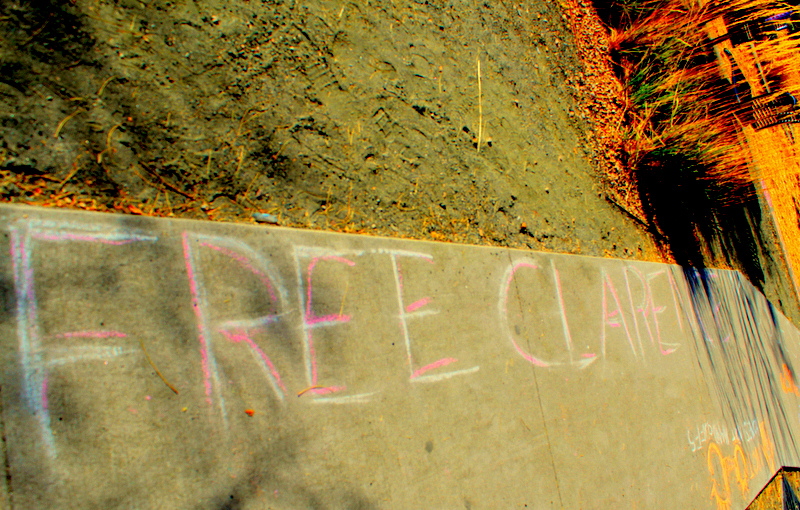 A supporter of Clarence Moses-EL writes in chalk “FREE CLARENCE MOSES EL” on the sidewalk outside of Lindsey Flanagan courthouse in Denver on the first day of the retrial of Moses-EL.

The under-representation of African Americans on the remaining jury pool was challenged by defense attorney Gail Johnson who is counsel for Clarence Moses-EL.

Moses-EL is undergoing another trial 29 years after he was first accused by a victim of an August 15, 1987 attack.  He was convicted the next year for the incident and spent the next 28 years in prison.  The victim said that she had a dream that Moses-EL was her attacker.

In that attack, the victim was left so badly beaten that her own sister did not recognize her.  Prosecution witness Dr Napoloan Knight, who was a resident of Denver General hospital in 1987, testified in court today that the victim’s face was left with facial fractures and abrasions on her face and body.  Defense for Moses-EL used the moment to extract testimony from the examining physician to perhaps place doubt about the victim’s ability to make an identification.  The injuries to the victim, including a swollen face, blood in her eyes, an inebriated condition, along with her lack of identifying Moses-El as her attacker to the doctor were all issues raised by defense attorney Gail Johnson.  Knight also explained to jurors the procedures that existed in 1987 to examine a sexual assault victim including swabbing that was collected and stored and remained in the doctor’s possession until turned over to authorities.

In 1987, DNA analysis was not in practice and couldn’t be used for identification of the guilty but also to rule out the innocent in legal proceedings.   The rape kit containing the swabs was placed in an evidence file and marked “Do Not Destroy” by police through the years Moses-El spent in prison, all the while Moses-EL maintained his innocence.  Years later in an unprecedented move, he was able to gather enough money-$1000- from others incarcerated with him to have the rape kit tested when DNA analysis was entering its infancy as evidence in legal proceedings.  Thinking he now had his proof, his hope for exoneration was crushed when it was determined that the rape kit was thrown into the trash by the Denver Police Department just weeks before his filing request for DNA testing.

Three years ago, a man whom the victim originally identified as a possible attacker confessed in a letter to Moses-EL that he had committed the crime.  In a hearing last year LC Jackson testified that he had consensual sex with the victim but became enraged when he realized that the victim had switched to having anal sex with him.  He described his rage over feeling dirty and then testified about the details of how he beat the victim.  After Jackson’s testimony and while leaving the courtroom, he stopped at where Moses-EL was seated, put his hand on his shoulder and said that he was sorry. 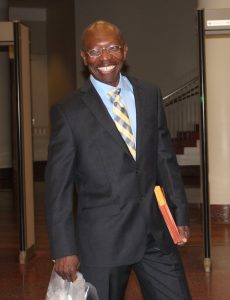 Given the new evidence including testimony from a forensic expert who testified that blood typing from the rape kit pointed to LC Jackson as the attacker and not Moses-EL, in December District Court Judge Kandace Gerdes vacated the 1988 sentence, ordered Moses-EL released on $50,000 bond and the district attorney’s office later ordered a new trial.  Despite public outcry and pressure to drop the case, the Denver DA pursued the position that LC Jackson lied and that the victim continues to identify Moses-EL.  Public response included rallies, letters, and a petition delivered to District Attorney Mitch Morrissey earlier this week, also to drop the case.  The petition organized by the NAACP, the Greater Metro Denver Ministerial Alliance, and Progress Now gathered over 2000 signatures in two days, Reverend Tammy Garrett-Williams of the NAACP told The Nation Report during court recess today.  She said that Morrissey did not accept the petition and that his spokesperson said that he was not available and received the petition for him.

In court today, Johnson entered a “cross-section challenge” about the remaining majority-white jury as unfair and unreasonable.  Johnson took the position that the initial pool of 150 potential jurists was not a representative cross-section of Denver’s population when only eight who appeared to be of African-American descent appeared as potential jurors in the initial pool.  In Johnson’s motion, she argued that of the 150 pooled jurors, that at least 15 of African-American descent would make a fairer representation of the community than the eight who appeared to be of African-American descent.  Johnson pointed to the 10% of Denver’s population that identifies as African-American when she moved to begin jury selection again.  She raised 6th and 14th Amendment violations and the right to a fair trial in front of a jury of his peers as her reasons.

Gerdes denied the motion stating that 700 jurors were initially summonsed and that 150 responded and answered a jury questionnaire.

At the end of today’s proceedings, Johnson reiterated her challenge to the remaining seated jury, none of whom appeared to be of African-American descent.  Gerdes again denied the motion.

A second prosecution witness as well as other witnesses are expected to testify at tomorrow’s proceedings.