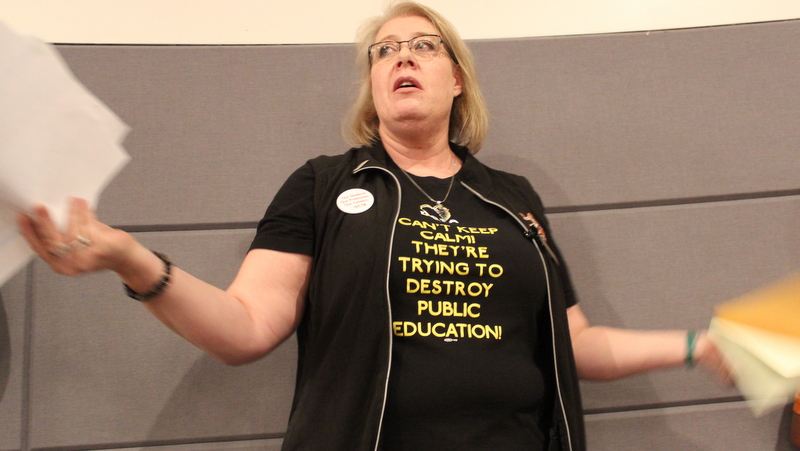 In an explosive community gathering held one week before the end of classes on Friday, West Early College students, parents, teachers, and community members filled a room at the school to oppose the district’s announcement that the school is at risk of being on the chopping block for 2018-19 school year.

The meeting involved whether West Early College, located in historic West High School, will remain open or whether it would be subject to “restart” under another name and structure, or whether it would consolidate with another school.  Superintendent Tom Boasberg did not attend the meeting which was facilitated by Deputy Superintendent Susana Cordova.

Denver Public Schools has restructured close to 50 schools in the last ten years including consolidation and closing.

West Early College recently received state official status designation as an “early college,” allowing for students to earn an industrial certification, an Associate Degree or credit hours towards a four-year university at no cost to families at the same time students earn their high school diplomas.

But early in the school year, officials at Denver Public Schools warned of the school’s potential risk of being targeted for its “consistently low-performance” under what the district calls the School Performance Compact (SPC) adopted by the district in 2015.  The SPC uses three criteria to determine a schools performance:  school rank and whether the school is “ranked” at the bottom 5 percent of schools using “multiple years” of school ratings.  Schools in transition would not be exempt from the ranking process.

Under these new policies, West Early College along with Greenlee Elementary in west Denver, Gilpin Montesori in northeat Denver, and Amesse Elementary in northeast Denver all were listed as “low-performing schools.”  The schools underwent a School Quality Review (SQR) process where individuals from the district staff, community members, and a “third-party vendor” visit and then were assigned a score for classroom instruction and staff culture ranging from 1 to 4 of ten categories for a possible 40 points.  According to the criteria, schools must score at least 25 points on this review, and not have a score of 1 in any of the ten categories to avoid closure. 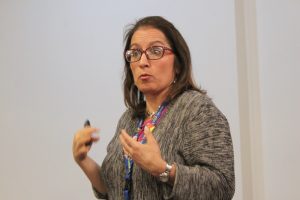 Cordova explained to the room the exact process that would take place,

“If the school is red and considered for restart or consolidation, the first decision that would happen, and this would be a decision that the board of education would make, would be ‘should we restart, or should we consolidate?’  Any time the Board of Education makes a decision like that, there’s lots of opportunity for public comment.  If the decision is for restart, which would mean we would be selecting a new program, it’s a two-step process.  The first process is we ask for people who are interested in creating a new program to apply through a program called The Call for New Quality Schools.  A group of teachers here from the school could apply, the current administration could apply, other people could apply, other schools in Denver could apply, charter schools could apply.  The first step is to determine, ‘Is it a quality application.’  If it’s a quality application, then it goes to the second step.  Which is to say, if there’s one quality application, the community gets the opportunity to say ‘that’s a good match for us or it’s not a good match for us.’  If there’s more than one, we create something called a community review board.  We ask parents in the community who are not part of an applicant team, if you’re helping write a plan, we don’t allow you to be part of a team that selects.  If you’re not part of the writing plan, you can apply to be on the review team that reviews all of the different quality applications to say, ‘This is the right match for our community.’  And that’s a recommendation that comes directly from the community to the superintendent and to the school board for the right match for the school.  As a reminder, that’s an if we are ‘red’ that will be the process that we look at.  If we’re not red, or we’re yellow or orange, the current program will continue.”

District officials defended the process saying that the new policy would provide uniformity and fairness thereby curbing emotions and politics from decisions.  Officials also said that under the new policy that schools would be given support and time to improve. 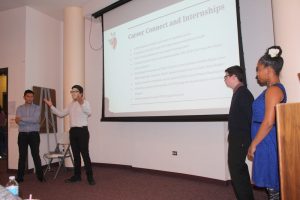 But students and teachers challenged the assertion by providing data compiled of measures that they say proved otherwise.  Early in the meeting, four students (photo left), Neteru Davis, an 11th grader, and sophomores Levi DeLude, Angel Hernandez, and Eliseo Vigil presented data that showed that the school is improving.  The students showed a School Quality Review (SQR) score that improved from 19.39% to 26.06% in just two years (the school district didn’t publish data for 2015).  School median growth on CMAS/PARCC standardized tests improved from 44 to 59.5 in the same time period the students said, and the school has the highest graduation rate of any early college school in the district and 6% above the district average.

The students challenged other district conclusions with their own data.  Where the district concluded that 1 in 10 middle school and 9th grade students is reading, writing and performing in math at grade level, the four students showed closing gaps from earlier years in language arts for example.  The students also showed their data for students who earned college credit, and those who have secured internships at prestigious institutions. 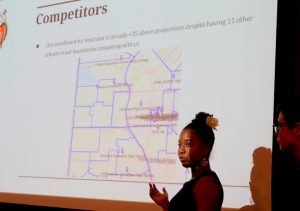 Where the district said that enrollment figures from 2016-17 showed that 43% of middle school families and 78% of high school families in the West Early College neighborhood chose to enroll at other schools, the four students showed increasing enrollment projections.  One student in the audience argued with district officials, agreed with the other students and yelled out to district officials, “When you trash our school by saying how awful we are, you would want to go somewhere else too!”

The meeting grew contentious when the question and answer session began.  Veronica Barela, an award winning community organizer for her work in housing development and civil rights, strongly criticized the school district for what she termed “disparate treatment.”  Barela said that she has seen the district move to a charter school model and that with the new Secretary of Education, Betsy DeVos, that she expects the trend to explode, “That’s all she wants to do.”

Barela then said she would seek legal counsel at the close of the meeting,

“To me what’s going on here is disparate treatment.  I have to wonder if anybody’s ever filed anything against the public school system for disparate treatment.  We worked too hard to keep this school open.  And it’s improving.  You can’t judge this school by Cherry Creek.  And you can’t judge this school by East High School.  You can’t do that.  That’s the tool that DPS uses to close these schools down to put a charter school in there.  And that’s exactly what they’re doing to this school.  And don’t you ever think that it’s not that, because it is that.  And maybe an attorney or a law firm needs to look at the behavior of DPS around these very situations.”

The meeting was attended by several teachers of the school who all vocalized their support of the students, especially of the students who were involved in compiling their presentation with data collected on their own time.

One teacher who received heavy applause was Kris Bethscheider who teaches social studies at the school and who also described an unequal and disparate treatment when comparing schools.  She referenced a March 13, 2017 school board meeting, “Oddly enough in this meeting you guys brought up the school performance criteria, and the new criteria being equity.  And as soon as it was brought up in your board meeting that green and blue schools would end up possibly orange or red, the word ‘support’ came right out.  [District officials responded] ‘we’ve gotta support those schools. We’re going to make sure this doesn’t bring them down.  We’re going to make sure our blue and green schools don’t get damaged by this new criteria.’  Meanwhile you removed every single support that we had used this year to actually bring ourselves above that criteria to get shut down which was SQR and I think it was because we put a wrench in your little plan to shut us down when we got over 25 points.  You got rid of SQR. There is inequity in how they treat their blue green schools versus their red schools.  They don’t want to support our school.  They do want to support their performing schools much more than they want to support ours.”

Bethscheider also challenged the district’s use of data from previous years when West Early College has been in official existence for only two months with a new program and a new principal.  So according to Bethscheider, technically the school has not been operating in the red for the number of years required by the board’s own policies, “Give us another chance.  Give us a chance to be early college for a full year under a program that is working per our data that we’ve shown you.  There’s a lot of inequity.  You’re not giving us enough time for our program.”

Bethscheider continued, “So all I want you to do is just ask our students if they feel they’re in a failing system.  If they’re about to get college credit, and they really would like this school shut down.  Three of those [four students] who spoke, you shut this school down on them, you’ll shut it down on their senior year.  They will not be in this school’s senior class and that’s a fact.  You say it’s OK, but it’s not.  You have said in your own meetings that we know that there will be casualties or that there will be upset community members, but [school board members] said that we saw these gaps in data ten years ago.  We should have addressed this issue ten years ago.  Guess what?  That’s when these kids started school and you didn’t address the issue ten years ago when they were five.  Now they’re fifteen and you want to shut their school down before they’re seniors.  That’s just terrible.  Give us one more year!  Give us a chance!  It’s all we can ask is give us a chance at Early College.”

Denver City Council member Paul Lopez who graduated from West High School questioned when it was determined that the school was at risk of closing and when the numbers first were published, “This is what my concern is, is the timing.  It just doesn’t smell right.” 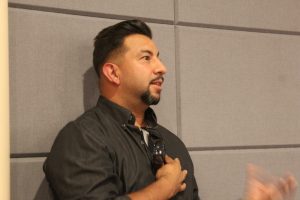 Two in the audience questioned changing criteria coming from the board to judge schools.  One was Mr. Black who questioned, “What happens if we are orange.  Are you going to change the criteria then?”

Another was Kurtis Quig, Middle School Principal at West Early College, “I heard you say you would promise that if we ended up orange, or something else that the school would not close.  I need to hear you say, you promise that you will not move that 34% [criteria] so we know what our target is.  Because we’ve moved forward 7% every year, and the next 7% [target] is 34%.  I need to hear you say that.”

Cordova explained that the SPC reviews three years of data, “If a school has a history of orange for 2 years, and in the final year has red, or is red and then red back to back, a school can be considered for restart/closure/consolidation.  If the school is rated yellow, the school cannot be considered for closure or restart.  It’s only the combination of three years, orange and red for three years, with red in the most recent year or red back to back.”

The school board is expected to vote in December on the first closures under the new policy. 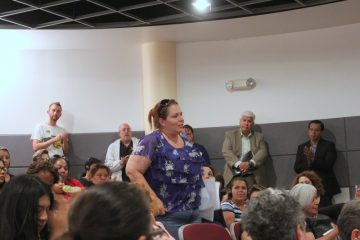 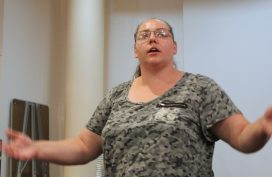 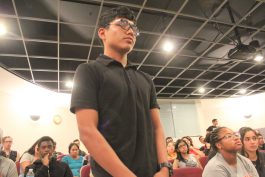 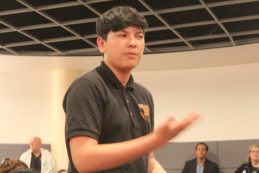 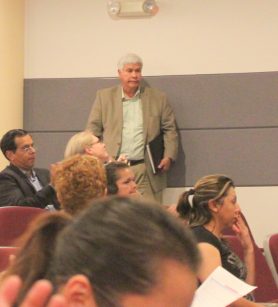 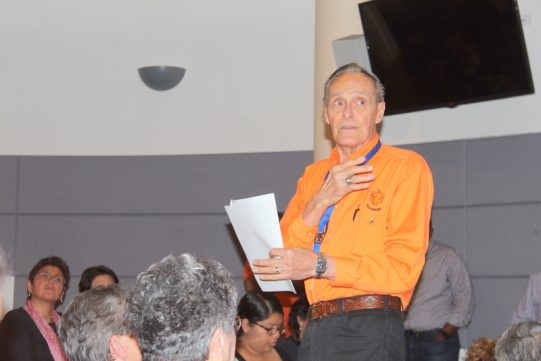