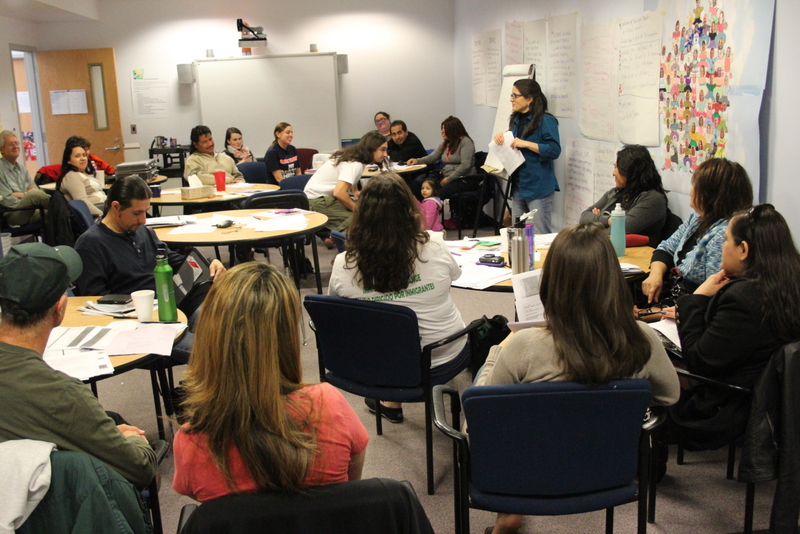 AURORA, CO-In recent years The Nation Report has covered the deportation proceedings of Aurora student Eduardo Hernandez and Aurora resident Jeanette Vizguerra both members of the immigrant rights group Rights for All People-RAP. After community organizing that resulted in crowds demonstrating outside of Denver federal court in support of the two, both have won the ability to remain with their families although both continue to work for permanent status to remain in the US.
On January 30, House Republicans unveiled a set of principles on immigration reform which failed to align with the immigrant rights principals that the group works to achieve. The next day the group issued a press statement denouncing Republican position and called for US District 6 Republican Representative Mike Coffman to take a positive role in support of the large immigrant population of Aurora. Rights for all People-RAP held a meeting today to organize for 2014 where past victories and future goals were addressed.
In a press statement to House Republicans last month, immigrant rights group RAP, said, “Our community deserves better” and announced that they will  ” work tirelessly to ensure that US District 6 Representative Mike Coffman accurately represent the needs of all his constituents when working for immigration reform.”
Since 1995 the group has organized against policy that has negatively affected the immigrant communities of Colorado. Just in 2013, the group played a significant role in winning the repeal of a 2006 statute -Colorado SB 90- which required police to report immigration status of those detained.  RAP organized to win a Drivers Licenses for All bill in the state and played a role in drafting wording for the US Senate immigration reform bill that was passed last summer, although the bill is currently delayed in the House. 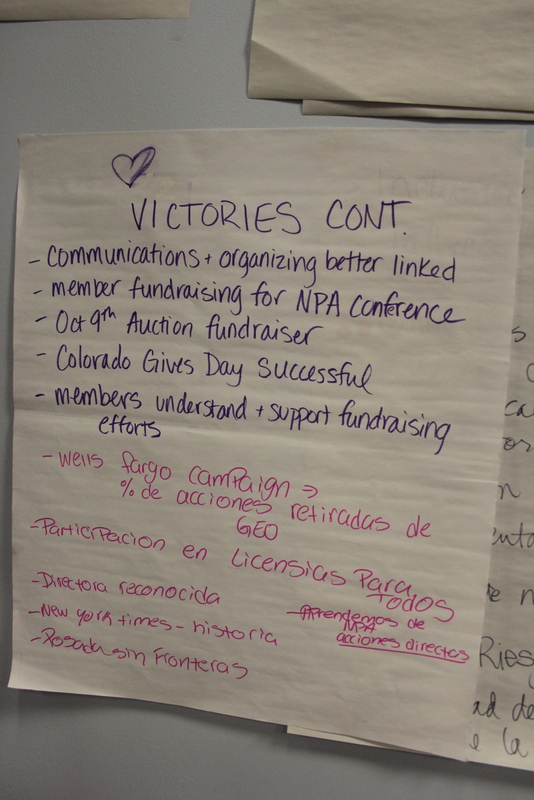 Locally the group led actions against banking giant Wells Fargo to persuade the corporation to divest nationally from for-profit prisons. In Aurora those actions involved the GEO corporation which houses a for-profit immigrant detention center. The result? In 2013 Wells Fargo divested 75% of their holdings in GEO.
Rap member Alvaro Campos told The Nation Report that he was once a detainee at GEO and why he now volunteers with RAP,

“It’s important to call out to society to participate in all that makes up our society and the people who find ourselves in our situation here on this same ground.  We need to analyze what the results have been of what’s been done by the president and by senators and representatives legislatively.  So we need to see  that what has to be done in the future is not something that has to do with negotiation or gambling with our freedom but we need to create an immigration reform that’s going to be a healthy change for society and not just  a toss of the coin in the air .  We can’t negotiate with the freedom of people.

RAP is an organization.  We want to bring people out to participate in this and to help create this reform that is needed.  People need to leave aside their fears.  And people who are out there and saying that they are resigned to failure, well RAP isn’t designed for failure.  And we want the immigrant community to stand with us and support this reform until we reach our goals of immigration reform.

I need to explain that I was fortunate enough to be able to win a case that I was subjected to, a kind of labor slavery.   I won my freedom after 18 months detained in Laramie, Wyoming and I was able to win my freedom  and to win that case in favor of a society that finds itself with the kind of cancer that enables slavery in certain parts of the country.”

Was that here in Aurora?

“This happened in Laramie, Wyoming where I was arrested and I was held for 18 months by immigration and then GEO for another 6 months.  I was held in El Paso county in Colorado springs …like a criminal and so that’s the thing that I want to express is that I’m here .  I’m free now and I’m here struggling with RAP for the good of society.” 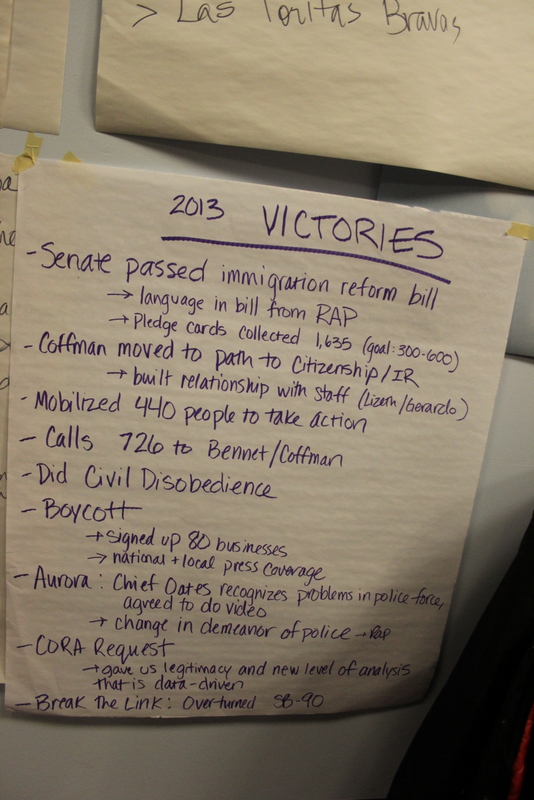 Locally the group has worked for better relations with the Aurora Police Department after members of their community had undergone separation from their families through deportations or are currently in the midst of proceedings. Lisa Duran, Executive Director of RAP said that the organization proposed new policies to the Aurora Police Department to improve their relationships with local immigrants.  It was in 2009 that RAP first won an agreement with the Aurora Police Department to improve instruction to officers about the effect of assessing immigration status during routine traffic stops or during the investigation of a crime.  It was last year that that Aurora Police Chief Dan Oats joined with RAP to develop a new training video that will address the treatment of immigrants in the local community.  Lisa Duran,

“In 2013 Rights for All People was victorious in coming to an agreement with the Chief of Police of the city of Aurora to do a training video for his officers in which he is urging them to consider the damage that gets done when they ask a person about their immigration status when it’s not necessary in the course of a traffic stop for instance.  In Aurora there has been so much devastation in our communities because people were stopped, asked for status, and ended up in deportation.  And so many families were negatively affected.  And so we’re hoping that this training video is going to mean that there will be less of those questions and few people ending up in deportation.  It’s a wonderful, wonderful step forward in our relationship with the police and the police have been nothing short of amazing in the way that they have responded to our requests to try to remedy this situation.  It’s a wonderful thing.”

It’s been a long time coming, right?   You have been working on this for four years?

“Four years.  It’s been a while coming.  You know we all grow and change and I’m really glad to see that it’s here.”

Last year RAP produced its own set of principles that focuses on family unity and the equal treatment of people.  Josefina Orquijo is also a member of RAP,
“What the community needs is immigration reform. Its very necessary. The immigration issue is something where there have been some reversals and it’s something that has to be achieved.  What’s really required and what the most important thing is, is that the community show up. That they come out and show what they want.”

Is the community showing up?

“In my opinion, no, because this struggle really came up in a stronger way when the Dreamers came up and said, well here I am, this is my country, and I want to be taken into account about what’s going to happen and I’m here and I’m going to take this risk.”

Those who qualified to receive deferment from deportation under the Dream Act have become known as “the Dreamers”.  The Dream Act has failed in the US legislature ten times however, individual states subsequently adopted their own versions of the Dream Act to provide those who were brought to the US as children, a reprieve from some of the restrictive conditions under which they live.  Josefina Orquijo,

“This is the way the game has to be played in this country. As the Latino population, we have to know how the game is played and it’s a big challenge. We’re not very well informed but we need to know how to make our point and how to achieve what we need.

We need to follow this model. This is a model where the Dreamers showed us how to succeed,  where they stood up and said, this is my name, I’m here without documents but this is my country and I’m here to stay and I want to make a change,  That’s what we need to do.”

In the 2012 election the Latino population made up 10% of the electorate and groups such as RAP are working to increase this number by providing civic engagement opportunities, voter registration drives, and legislative forums.