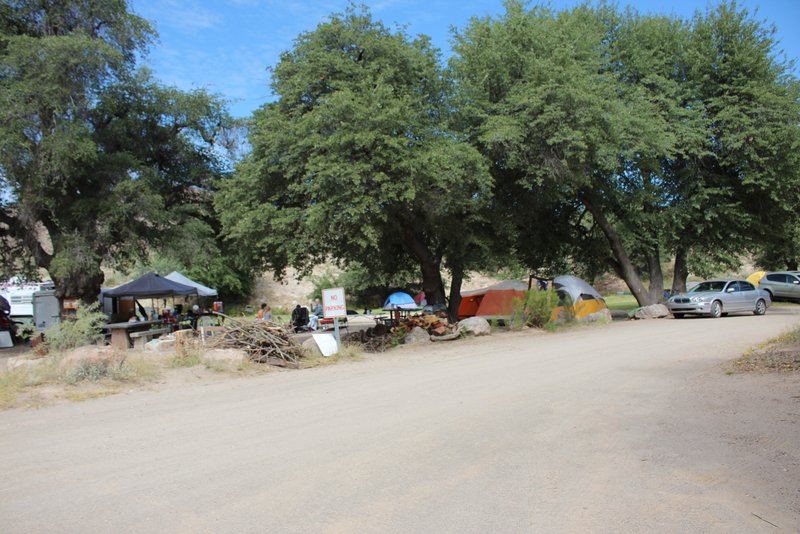 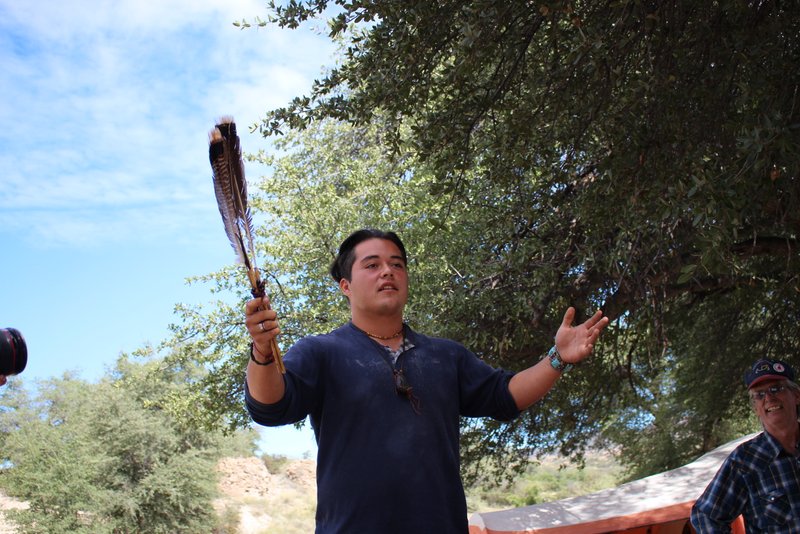 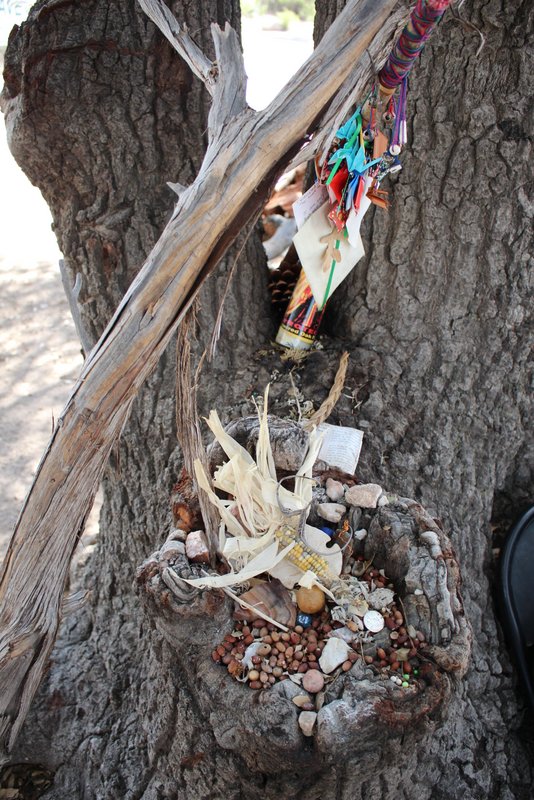 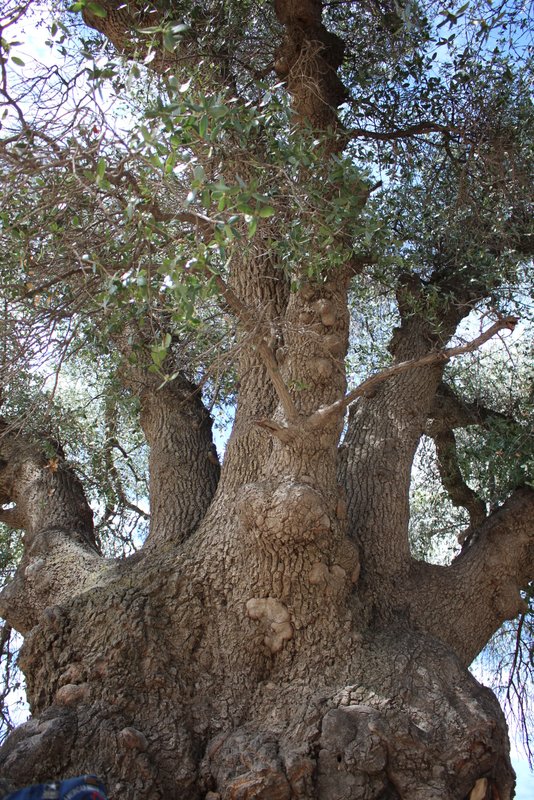 Update on the Oak Flat Occupation

TUCSON-All three generations within the same families have joined together with others to protect Oak Flat sacred ground in Arizona. In July The Nation Report met 16-year-old Naelyn Pike, her father and grandfather who along with a group caravanned from Denver on their way to Washington D.C. Their intention was to bring to legislators and to President Obama the information that they said leaders needed to make a decision about a June 2014 bill sponsored by Arizona representative Raul Grijalva called the Save Oak Flat Ac

Representative Grijalva spoke to the Apache Stronghold caravan in July after it arrived to D.C.,

“We have been fighting this land grab, this deal to a multinational corporation, a foreign owned company at the expense of Native American people. That’s how this deal happened. It happened in the middle of the night. It got stuck on a Senate bill, a must-pass piece of legislation about national defense and our veterans and our military. That’s how they got it done. In the light in front of everybody, they could not do it. The callous part of this is that it stepped all over basic laws, basic rights, and more importantly stepped on sovereignty, ignored sacred sites when we should be embracing and protecting our sacred sites like we embrace and protect our churches, our mosques, our temples, our synagogues.”

HR 2811, the Save Oak Flat Act would repeal the section of the National Defense Authorization Act which transferred over 2000 acres of Oak Flat to Resolution Copper. Resolution Copper, a subsidiary of mega mining corporations Rio Tinto PLC, a British company, and an Australian company BHP Billiton wants the land to mine copper. The Oak Flat land transfer was slipped into the Senate’s annual military spending bill as a rider by Arizona Republican Senators John McCain and Jeff Flake and into the House version by Arizona Republican Rep. Paul Gosar.

Naelin Pike told The Nation Report in July as the caravan stopped in Denver, “We’ve been fighting since 2006. We have the largest copper ore in the world and what they want to do is extract that.”

The exchange would trade 2,422 acres in the Tonto National Forest for 5,344 acres in Southern Arizona that has been degraded by cattle and ATV use. The process that Resolution Copper intends to use, known as block caving, would involve blasting substrate 7,000 ft beneath the surface to extract 1 cubic mile of ore through an excavated horizontal tunnel.

This process would create and underground crater that would cause the substrate above it to collapse into the empty space estimated to be 2.5 miles in diameter. The crater itself would expose hazardous heavy metals, including Uranium, which would also be present in tailings or waste piles that is planned to be dumped in the town to the east of Oak Flat.

Oak Flat is considered a sacred site of religious, cultural and historical significance for Apache, Yavapai and other tribes. It is the home of certain Holy Beings or Ga’an, and a place of ancient settlements and burial sites.

The three generations join another family, James Ybarra, his father and grandfather who support the sacred site to protect it from the mining. Last week The Nation Report met 21-year old Ybarra at the Oak Flat site where he has been occupying.

“They want to take all of this away from us. They want to turn this entire place into a giant open pit mine. They’re already doing exploratory mining. We are fighting that and we’re making a lot of progress. There are petitions going through. There’s a lot of congressman supporting us. There’s a lot and lots of politics involved with this. It’s very powerful. We’re making a lot of progress. We are winning. We are winning.

This proposed mine violates the Apache Treaty of 1852, Section 106 of the National Historic Preservation Act, and the Executive Order 13007, Indian Sacred Sites. The area was protected by executive order prohibiting mining by both Presidents Eisenhower and Nixon.

Oak Flat is part of the San Carlos Apache Tribe’s ancestral territory. In 1886 the federal government removed San Carlos and Yavapai Indians from Oak Flat and the surrounding area and expropriated the land to become part of the Tonto National Forest.

China holds an ownership in Rio Tinto, a partner with Iran in the Rossing uranium mine in Namibia. Over 50% of the value created by the mine is projected to go to national and international investors.

Besides the loss of sacred lands, opponents to the mining of the land cite neglect, abuse, and misrepresentation on the part of the company.  They add that Rio Tinto has a dismal environmental track record. The Greens Creek Mine in Alaska, formerly owned, in part, by Rio Tinto, is said to be the state’s second largest dump of toxic waste.

In terms of labor rights, they add that Rio Tinto has a historical disregard for human and labor rights practices. 570 miners were locked out of Boron, California’s Borates Mine, also a Rio Tinto company, for over 3 months in 2010 for refusing to demote to part time jobs with less benefits.

The proposed block cave mine is projected to consume up to 20,000 acre feet of water each year, the equivalent to the amount of water used by 180,000 people in a year.  Opponents say that Resolution Copper Mining has not offered a groundwater and surface water protections plan and has not completed adequate testing to show that the mine will not affect regional aquifers and the Tonto National Forest.

The proposed block cave mine would be the largest mine in North America and cause the surface of the earth to collapse at least 2 miles in diameter. Resolution Copper Mining has not offered a mitigation plan for sustaining the surface or to prevent loss of natural springs, seeps and water resources.

Opponents also say that the company has not offered infrastructure costs such as roads, additional fire or police protection.  In addition they say that only 4% of the mineral value would flow to local residents in terms of wages and 71% of the tax revenue would go to the federal government.  They refer back to experience that has shown that mining does not increase employment. From 1974-1997, copper production in Arizona rose by 73%, but jobs cut by 56% due to automation. They cite this automation in the reduction in the number of employees for drilling, blasting, train and truck driving.

Opponents discount resolution copper mining’s “mine of the future” for its use of robots not human labor. They say that the company plans to use highly mechanized and automated panel caving techniques creating jobs in remote operation centers, not locally.

Exploration will not be completed until at least 2020.

Similar to Colorado’s Rocky Flats site, Arizonans could be left with a Superfund site of unprecedented magnitude and a cleanup bill that would ultimately cost US taxpayers millions of dollars..

Opponents add that since the company is a limited liability corporation, it can just walk away.

Though the land exchange bill was passed, the Apache-Stronghold is determined to keep the mining mega corporation off their sacred land.

On June 24 the National Trust for Historic Preservation listed the U.S.’s 11 Most Endangered Historic Places that are at risk of destruction or irreparable damage.  Oak Flat was added to the list.  Locals are hoping for permanent preservation.

The Save Oak Flat Act was referred to the House Subcommittee on Indian, Insular and Alaska Native Affairs on July 1, 2015. The bill has multiple co-sponsors and bipartisan support including from Representative Jared Polis of District 2 in Colorado.