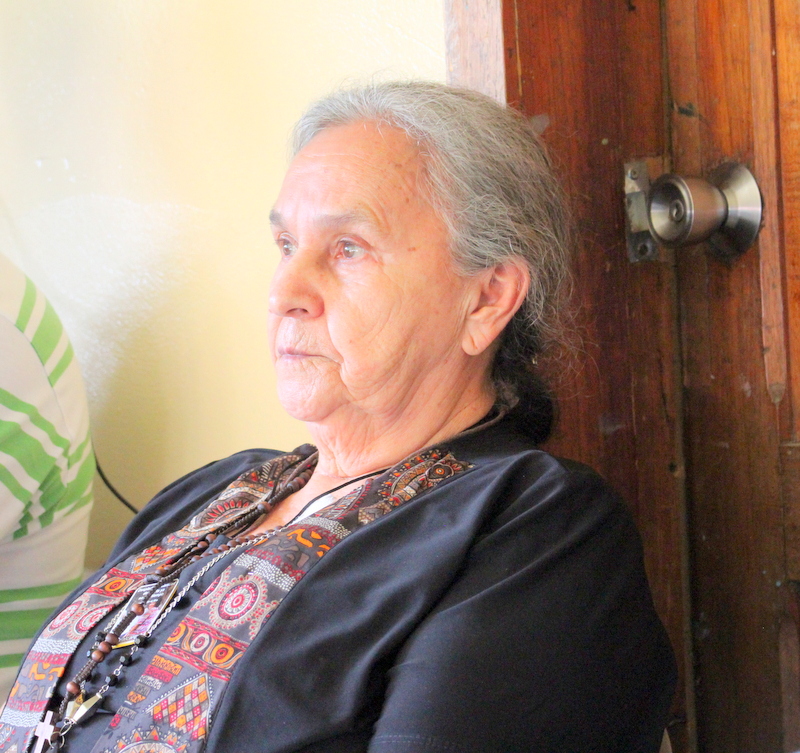 “Is this what you call clean energy?

Is this what you finance and call development?”

Her daughter, environmental and indigenous activist Bertha Caceres was assassinated in her home in March after years of death threats originating partly from her work opposing the dam and the contamination to indigenous land.  One person arrested for her shooting was an employee of DESA, but other allegations by the indigenous Lenca against DESA employees also are documented including intimidation, threats, and assaults.

In the following open letter, Ms. Flores Lopez refers to her daughter Bertha as “Bertita.”

My name is Austra Bertha Flores López, mother of Bertha Isabel Cáceres Flores, human rights defender murdered on March 2, 2016.  I write this letter because of the need to express truths, many of which you already know and others which you should know and should give special attention to.

1. You have financed a deadly project, Agua Zarca, imposed by DESA which has caused forced displacement, bloodshed, pain and grief for my family and the Lenca people.  Therefore, you should respond to the fact that you have provided financial and logistical support to these companies of death and corruption, which I can affirm because the investigations of the Honduran Public Ministry reveal that persons linked to DESA are responsible for the murder of my daughter.  We and you both know that the material authors and some of the coordinators of the crime are linked to this company.  A clear example is: Sergio Rodríguez who served as Environmental Manager of DESA and retired Lieutenant Douglas Bustillo, head of security for the same company, both of whom are incarcerated in the National Penitentiary “Marco Aurelio Soto.”

2. The Desarrollos Energéticos company has been a project supported by the Armed Forces of Honduras.  The security for the company was and continues to be provided by the Engineers Battalion which provides a section of elite troops to protect it.  If this were not enough, the president of this deadly company is currently an intelligence officer in the Armed Forces, Mr. Roberto David Castillo, who constantly issued threats, attempted to bribe and even sexually assault my daughter, which is documented in one of the 40 complaints that Bertha Isabel filed with the Public Ministry.  Due to the clear participation of military officials in the harassment and persecution of Bertha Isabel, it is no coincidence that the State of Honduras has imprisoned Major Díaz Chávez, who chose and hired the assassins assigned to kill my daughter.  Due to the death threats that Bertita denounced before the Inter-American Commission on Human Rights, this international body ordered the State to protect her, so that her life would not be at risk. However her assassination demonstrates that this obligation was not fulfilled. Despite the IACHR mandate to protect, threats from employees of DESA, police and the armed forces of Honduras intensified days before the crime.  Another fact is that Tomas García, indigenous from Rio Blanco, was murdered by Kevin Saravia, a member of the army who was convicted for this crime.  In addition to this there is testimony from an ex-official of the Armed Forces who states that Bertha Isabel Cáceres Flores, Human Rights and Environmental Defender, was at the top of a hit-list of persons to be assassinated by one of the death squads. DESA maintains a paid squadron of assassins including Olvin Mejía who, together with Carlos Méndez García, allegedly killed Bernardo Pérez, indigenous of Rio Blanco.  Olvin Mejía was captured by police on December 27th and in clear violation of the Constitution of the Republic, he was released on December 31st despite clear indications of his participation in this crime.  It is important to note that outside of the courthouse of Intibucá at this time was Sergio Rodríguez (Ex-Environmental Manager of DESA, currently in prison) and Jorge Ávila, head of security for DESA who replaced Douglas Bustillo (also in prison.)  It is important to note that according to testimony of those present, Sergio Rodríguez commented at that moment, “We are going to resolve this with money.”  If you review file 08 – 20l15, you will see the judicial atrocity in which the prosecutor requests that charges be provisionally suspended.

I know that Bertha Isabel notified you repeatedly and in different ways about the facts outlined here.  Therefore we understand that as financial organizations you were aware of the human rights violations, illegalities and corruption in which the Agua Zarca Hydro Electric Project is immersed, yet you continued to finance these murderous companies.

The ATIC (Technical Agency for Criminal Investigation) reveals that two death squads, comprised of individuals linked to companies with interests in extractive industries, were vying for the murder of my daughter Bertita.

3. When counter- intelligence official with the High Command of the Armed Forces, Roberto David Castillo, worked in the National Electric Energy Company (ENEE), he received a double salary:  one as an army officer, and the other as a functionary of the Electric Company.  For this act of corruption, he is under review by the court of auditors.  It is important to mention that he also sold overpriced office equipment to the Armed Forces of Honduras through his company, DIGICON.  He is also suspected of taking ENEE projects and studies to build a public dam in the same place that DESA chose for the Agua Zarca project. This situation is painful and unjust.  In the name of “free competition” the result is that through dark alliances, trafficking of influences, and with studies that were property of the state and had already been carried out by ENEE, the Agua Zarca Project was approved in record time.

This concession was approved during the de facto regime of Roberto Micheletti, at the time when multilateral organizations including the UN, OAS and all of the democratic countries of the world, refused to recognize the regime that had been installed through a coup d’état.   The Inter-American Commission on Human Rights refers to a “Coup d’état.”  According to article 3. of the Constitution of the Republic of Honduras, “No one owes obedience to a usurper government….the actions authorized by such authorities are nullified.”
4. The corruption and trafficking of influences in the case of the Agua Zarca Project is so evident that initially a concession was approved for the construction of a hydroelectric project of 14 Megas and the Ex-Vice Minister of the Secretary of Natural Resources, Roberto Cardona Valle, without passing it to the National Congress and in violation of the Constitution, increased it to 21 Megas.  Not only this, he also approved an extension to the time period in the contract for use of national waters from 30 -50 years, basing this action on a ruling from a private law firm.  It is important to remember that Mr. Cardona Valle is also accused in the economic looting of the Honduran Social Security Institute (IHSS.)  Another Ex-Vice Minister, in this case for the Environment, is charged by the Public Ministry for having approved an environmental license for DESA in violation of ILO Convention 169 and clear abuse of authority in violation of public administration. These cases provide clear evidence that in Honduras, we find ourselves facing a MAFIOCRACIA.
Another case of corruption in the Agua Zarca project is that in response to indigenous opposition, the installations of the project were moved more than 100 meters.  According to the law, in order to move a project more than 100 meters, all requests and procedures must be done over again and approved by the National Congress; this legal requirement was not respected and constitutes a crime.

Is this what you call clean energy?

Is this what you finance and call development?
Over 30 indigenous Lenca communities have repeatedly expressed opposition to this dam, from the headwaters of the Gualcarque river to the proposed installation site for this project of death.  See the results of the popular consultation on September 11 in which over 4,000 people expressed their rejection of these projects in a free and spontaneous manner, stating that this is not clean energy rather, energy that is stained with the blood of those who defend human and environmental rights and the commons of nature.
I consider clean energy to be that which is embraced by the communities, respects the law and those who respect human rights and is not embedded in corruption, traffic of influence bribery, the usage of front men, disrespect for ILO Convention 169 and murder. Clean energies are those that place priority on sustainable development in which everyone benefits, respectful of cultures and the environment.

What a shame that in Honduras the business of hydroelectric energy has become the dirtiest business of all, second only to drug trafficking.  DESA always makes a great display of violence and arrogance to the degree that when a group of people held an international vigil for justice for Bertha in Rio Blanco, department of Intibucá, they were aggressed with rocks and machetes, injuring one member of Congress as agitators shouted, “We have killed the fly and now we will kill you all.”  There are national and international testimonies denouncing this.

Is this what you mean by clean energy?

The owners of the project of death are Jacobo Átala, José Eduardo Átala, Pedro Átala, Roberto David Castillo, among others.  From this illegal and juicy business, they will receive over 100 million lempiras annually as net earnings, for a total of some 5,000 million over the period according to very conservative figures.  With such a profitable business, why not pay a million to murder my daughter for defending the common goods of nature and the rights of the Lenca people?  How many more are they going to murder, assured that they can do it and confident that by stealing files they can impose their framework of terror and impunity?  This project has promoted aggressive actions to the degree that the municipal authorities of San Francisco de Ojuera, with a group of alienated individuals, according to denunciations by my daughter days before her murder, insulted her in a profane and grotesque way and threated to kill her.

These are the projects that you support?

There is only one way to stop the massacre of defenders of human and environmental rights.  The only way to stop the murders is to guarantee that the crime committed against Bertha Isabel and no other crime, remains in impunity.

I send this open letter so that the people and organizations of the world know my position as mother and victim of policies of death in which you, as financial organizations, are co-responsible.  Therefore I have decided, together with my family and the people’s organizations, to sue you in the respective courts so that others do not have to live with the pain of losing a loved one in the vile way that our Bertha was murdered.

May God give me wisdom and may my energies not fail me in this effort that I dedicate to my daughter who courageously fulfilled her mission to defend life with her life, knowing that she was confronting the czars of power and greed.  With respect and conviction.