Denver Homeless Out Loud (DHOL) is petitioning Denver city council to take the lead in the United States following the December 16 US Supreme Court decision to refuse hearing Martin v. City of Boise.  In that case, the city of Boise, Idaho had asked the Supreme Court to overturn a Ninth Circuit Court’s earlier decision that camping bans are unconstitutional.

Boise’s city ordinance, similar to many throughout the country including Denver, allowed for a misdemeanor charge for sleeping on sidewalks or parks “without permission.”  Ninth Circuit took the position that people who are in public spaces “cannot be punished for universal and unavoidable human conduct” such as sitting, lying down, and sleeping.

Adopted in Denver in 2012, Denver’s camping ban outlaws the overnight use of any form of protection from the elements other than one’s clothing.

The Supreme Court’s decision in turn allows the Ninth Circuit Court’s ruling to stand citing the cruel and unconstitutional nature of camping bans that punish and criminalize unhoused people for resting in public spaces.

DHOL issued a demand statement to Denver City Council at a rally held outside the capital on Friday to repeal its 2012 camping ban citing the “cruel and unusual punishment” point of reference in the Eighth Amendment of the US Constitution.

Denver officials have maintained that its camping ban is necessary to prevent the blockage of walkways and to avert public health and safety issues.  Statements issued by the mayor’s office and other city offices have defended a goal of matching those in need with “services.”

The letter to city council addressed this point:  “Courts must not look at merely whether housing or temporary shelter beds are empty, but to whether they are accessible.”

Those who defend the rights of those sleeping on the streets cite the many inhibiting factors for accessing shelter beds such as disabilities, family separation, work hours, pet policies, shelter bans, lottery limits, and possession space limitations as a few examples.

Currently in the Denver courts, a case is pending under Denver’s camping ban against Denver resident Jerry Burton that could challenge local ordinances in the Tenth Circuit District to which Colorado belongs.

“It’s not about beds, it’s about rights, my rights, your rights,” Burton said at the rally, “I feel good to put that key into the lock and go into my house.  I will not be happy until every unhoused person can do the same as I do.” 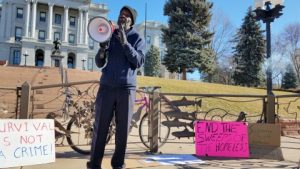 Burton was ticketed under Denver’s camping ordinance in April.  His defense has motioned the court to dismiss the charges based on unconstitutionality, “They’re doing something else to take away your rights, your dignity, and your choice of living in Denver or any other major city that are doing this crap,” Burton added.

The motion to Denver court cites discrimination and state-created danger that renders people surviving on the streets at greater risk under the current camping ban.

Local civil rights attorney David Lane, partner to defense lawyer Andy McNulty, spoke to those who attended the crowd saying that he was optimistic about the length of time that has passed for the judge to write an opinion on the motion of unconstitutionality, “When you’re a Denver county court judge, and all the powers that be, the cops, the city council, everybody in the community is looking at you.  The longer he takes in rendering a decision, the more optimistic I get about our chances.”

Meanwhile, Denver City Council will have to weigh the options for continuing or overturning the ban.  Advocates say they will continue litigation until they have legal standing for protection to survive without the threat of being criminalized, “We are homeless, not criminals.”

If Burton is found guilty, the promised appeal could cost Denver millions under years of litigation.  DHOL advises the city that the millions could better be spent on housing solutions.

Terese Howard, member of DHOL gave a summary of the letter to Denver City Council,

“Make the right choice NOW and end the Survival Ban before we have to spend millions more dollars and years in courts. Follow the action from the Supreme Court (yes even this Supreme court!) and end this unconstitutional law NOW!!!“

Howard added, “We hope that they will respond and take it seriously.” 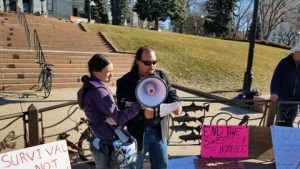