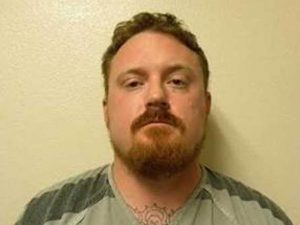 LA JUNTA, Colo-A noticeably thinner former police officer who was convicted for second degree murder in June appeared in court today with his legal team to motion Otero County District Court for acquittal or a new trial.  James Ashby entered the courtroom dressed in a black and gray striped two piece jumpsuit with his feet shackled together and his hands shackled to his waist.

Ashby was fired from the Rocky Ford Police Department after he fatally shot 27-year old Rocky Ford resident Jack Jacquez Jr. in the back on October 12, 2014.   Jacquez had been skateboarding in the road when approached by Ashby who followed Jacquez into his mother’s home. He has been in jail since his June 23 conviction that followed 11 hours of deliberation by a twelve member jury.

Ashby’s attorneys spent Friday morning arguing that he did not receive a fair trial based on what they said were confusing jury instructions and juror misconduct. Attorney for the defense, Carrie Slinkard argued that the jury would be confused about whether or not Ashby would be considered the initial aggressor if Jacquez presented himself as a threat, a claim that Ashby made during his trial, “Our position is that there was no evidence that James Ashby’s actions were unlawful with respect to his right to self-defense. At what point could [the jury] identify James Ashby’s actions that he was the initial aggressor?”

Slinkard attempted to convince the court that the burden of proof shifted from the prosecution to the defense, “As a defendant we had to establish that James Ashby’s actions were lawful.”  She went on to say that such a burden takes away the assumption of innocence and that such a scenario would remove the defendant’s ability to make a case for self-defense.

But District Attorney James Bullock said the issue had more to do with the “reasonableness of Ashby’s actions since Jacquez was shot in the back. In earlier testimony, Otero County Coroner Robert M. Fowler said that Jacquez had “no ability to change his motion of travel.”  In other words, Jacquez was not a threat with his back turned  since the first bullet rendered the victim immobile moments before he died. This lack of threat corroborates the testimony of Viola Jacquez, the victim’s mother who testified that after her son was shot, he simply fell into an adjacent room.

Additionally, Assistant District Attorney William Coburn raised prosecution arguments at trial that the initial illegal contact began at Jacquez’ back porch and not on the street after which point Jacquez attempted to enter and Ashby grabbed his arms according to court testimony, “It comes down to whether [the jury] believed that he was doing this in good faith.”  At trial the prosecution team argued whether the excessive force that Ashby used was reasonable given that Ashby pursued Jacquez from the street all the way into his home,”When instruction was given, [given] the evidence that we had, court made the right call.”

But Slinkard responded that such a call “sets a terrible precedent that all police officers will automatically be considered the initial aggressor” when contacting someone from the public, “My client was doing his job.  He had a right to ask [Jacquez] questions.”

Coburn questioned why Ashby did not consider getting a warrant to enter the home. Slinkard responded that Ashby couldn’t because according to his testimony, Jacquez refused to give his name.

But 16th Judicial District Judge Mark A. MacDonnell questioned Slinkard, “Aren’t you asking that police officers have a blanket exception not to be subjected to the initial contact rule?” to which Slinkard responded that she disagreed that verbal altercations are enough to make a person an initial aggressor, “The jury could have convicted my client based on lawful contact.”

Judge MacDonnell defended the jury’s verdict,”It’s up to the jury to decide credibility.”  But Slinkard argued that credibility could not be established with “limited facts.”  Colburn reminded the court that Ashby’s response to what he said were perceived threats, was not reasonable and that it was a credibility determination already decided by the jury that determined “whether James Ashby’s version was credible and whether the officer was acting appropriately.”  He added that he remained convinced that the jury acknowledged that Ashby was a police officer and that the court treated the former officer like any other defendant, “For the prosecution, the evidence was compelling to establish an escalating response by Ashby who neglected to identify himself as a police officer, did not radio in that he was stopping his car, and did not call for backup.”

Alleged inappropriate behavior of two jurors was raised by Slinkard.  One juror who said she had a law background is accused of bringing prejudicial information to deliberation, “Information of a legal nature cannot be brought before other jurors,” but Chief Deputy Attorney Andrew Hayden argued there was no evidence that the jury was prejudiced, “We all come with our own experiences and backgrounds.”

Another juror was accused of doodling on paper and at another time falling asleep but Hayden questioned the allegation that had been made by a reporter at the trial, “No one else observed it.”

In a final effort to call for a new trial, Slinkard questioned the jury’s access to a video of the testimony of the victim’s mother Viola Jacquez which according to Slinkard placed “undue weight and prejudice by rewatching” the video. Bullock defended with case law the jurors’ ability to review videos, and that nothing submitted or requested by jurors was evidence that hadn’t been admitted into the record. According to Bullock, the video evidence was not unreasonable, unfair, or unrelated, “This is a non-issue.” Judge MacDonnell reiterated that the jurors were in the company of the bailiff who indicated that she followed court instructions while playing the video that had been requested by jurors. 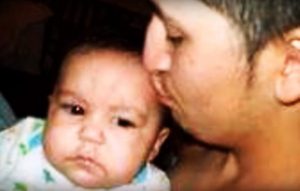 Jack Jacquez with his son