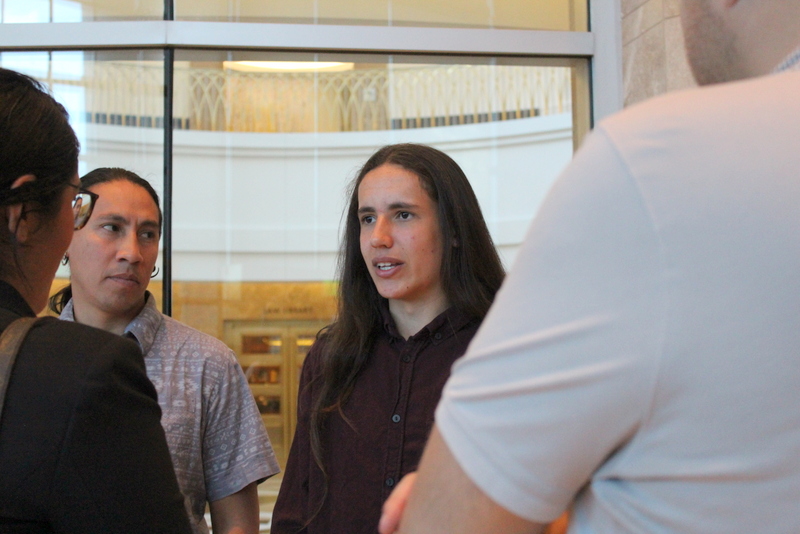 Xiuhtezcatl Martinez (r) stands with his father Tuesday after a Colorado Court of Appeals hearing inside the Ralph Carr Building. Martinez and 5 other youth plaintiffs are turning to the courts since they say the state has failed to protect them from the hazards of oil and gas extraction. (all photos: The Nation Report)

“As a coequal branch of government [the courts] have to act as a check on abuses by legislative and executive branches.  It’s what we’re seeing right here in Colorado.  The [Colorado Oil and Gas] Commission as part of the executive branch is really abusing its statutory authority and it’s using that authority in favor of the industry at the expense of the young people and future generations of Colorado.” said Julia Olson, attorney representing youth plaintiffs.

Six Colorado Youth Plaintiffs appeared huge next to the Colorado Oil and Gas Conservation Commission (COGCC) in the Colorado Court of Appeals on Tuesday.  The six are taking on the Commission in an effort to force the state to consider more seriously the health and safety of children.  The kids say it has not.

And they’ve been saying the same since they were much younger. 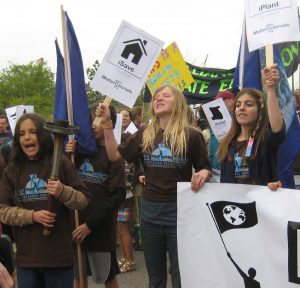 Xiuhtezcatl Martinez (l) and Aerielle Deering (r) march in Denver in 2011 in an I-Matter March for a clean environment. Both are plaintiffs in a current case now in the Colorado Court of Appeals.

Boulder resident Xiuhtezcatl Martinez, his younger brother Itzcuahtli Roske-Martinez, Sonora Brinkley, Aerielle Deering, Trinity Carter, and Emma Bray appeared with their attorneys  Katherine Merlin, Julia Olson, and Daniel Leftwich in a packed courtroom that was standing room only and extended out to an overflow room in the Ralph Carr Judicial Center.

They are appealing to the court to hear their case that raises the issue about a possible conflict of interest between what the COGGC is charged by the State of Colorado to do, and what the community perceives the organization is actually doing.

According to court documents, the youth hold that the two actions are mutually exclusive.  Their position is that producing oil and gas does not take precedence over the health of the children and that for the COGCC to favor the oil and gas industry is unconstitutional. 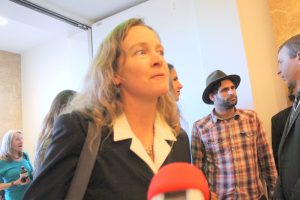 Julia Olson, an attorney for Our Children’s Trust speaks to reporters following the hearing.

Julia Olson, an attorney for Our Children’s Trust and representing the youth in court said that she was pleased about the hearing and the judges’ comments which showed her that the three judges were well-prepared about the issue.

“A hundred years ago, oil and gas was unregulated.  And because there was this explosion of oil and gas development they actually put the commission in place to limit and regulate it.  And over time its gotten more restrictive to stop waste, and to protect landowners rights and then to protect the public and environment from impacts.  And the problem is, culturally the commission has not made this shift.  And so its really important the court compels it to make that shift and start working for the people and not just oil and gas developers.”  Olson criticized how members of the Commission come from the oil and gas industry and that this conflict  should not impede the statutory instruction to protect the public.

Taking the COGCC to court follows years of actions by the youth to protect the environment from what they see is irreversible destruction.  The effects of years of fracking spills, leaks, climate change, contaminated resources, are all reasons the kids have been taking action since they were much younger. 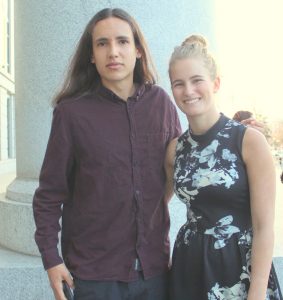 Xiuhtezcatl Martinez (l) and Emma Bray celebrate having brought their case to the Colorado Court of Appeals on February 21, 2017.

Emma Bray, one of the plaintiffs who is a senior at East High School in Denver said that she has marched for a cleaner environment before, but that her fellow plaintiffs have tried everything including speaking to legislators directly when she was twelve years old, “It was definitely my first experience so I found it kind of difficult to get my point across.  It was very difficult for a  young person to stand up to these adults.  They have so much power.  And it feels like you don’t.  We stated why it’s so important for these people to be aware of these issues and to vote.  Because a lot of them have kids.  A lot of them have grand kids, and we’re saying, ‘We’re in the same boat as you.’  We should all be respecting our earth, and we should all be aware of the issues at hand.”

The youth have a problem with the COGCC’s continued approving of permits for new oil and gas development “without regard for the dangerous health and environmental impacts.”  The same six youth plaintiffs filed a Petition for Rulemaking on November 15, 2013 based on the submitted evidence of threats to health, safety, and welfare of not only the public and themselves, but of future generations to come.  The plaintiffs petitioned for rules that would protect Coloradans, their resources, climate, water, soil, and wildlife.  In doing so, they asked for the COGCC to halt the permitting process for fracking until safety to health and environment could be proven.  They reminded of the Commission’s statutory responsibility to protect the public.  On May 29, 2014, the Commission denied the youth’s petition. 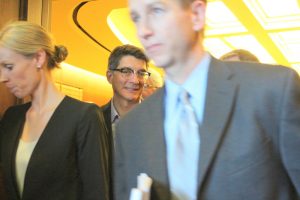 Britta Beckstead (l) attorney for the COGCC, and Matt Lepore (c) Director of the COGCC leave the courtroom of the Colorado Court of Appeals following the hearing.

Xiuhtezcatl Martinez of Boulder is a youth organizer with the group Earth Guardians and has been organizing since he was about six years old.  As a plaintiff, he maintains that he and his community will continue to fight until they have a cleaner environment.  He said that he is pleased about the bans and moratoria that were voter approved by Colorado communities “regardless of a governor, [or] of state representatives that don’t necessarily support the people, [or] that have been bought off by the fossil fuel industry.”

Martinez expressed both satisfaction and frustration with how the process to achieve goals has moved, “It’s really, really important the progress that we’ve made.  I’m frustrated that it hasn’t been more.  I’m excited that there’s so much more to come.”

The process for Bray too has had multiple benefits, “It’s important to get our message out there because a lot of time the youth message is not heard.”