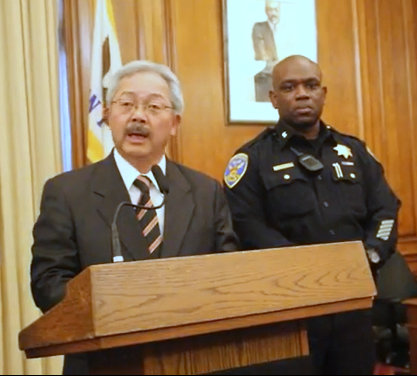 Mayor Ed Lee at an evening press conference indicating that he accepted the resignation of Police Chief Greg Suhr.

SAN FRANCISCO-After years of protests, marches, and other civil actions including a 17-day hunger strike outside of city hall, San Francisco Police Greg Suhr resigned today, Thursday following another fatal officer involved shooting that took place in the Bayview at midmorning.  Mayor Ed Lee held a press conference this evening and indicated that he called for Suhr’s resignation and that Suhr complied shortly after.

At a press conference held this evening, Mayor Lee said, ““For the past several months this city has been shaken and divided and tensions between our law enforcement and communities of color have simmered for too many years and that has come into full view.  While the facts are still emerging, we know that this morning a young woman of color was killed in an officer involved shooting,  The community is grieving and I join them in that grief.  These officer-involved shootings, justified or not have forced our city to open its eyes to questions to when and how police use lethal force.”

After defending Suhr as police chief, “He’s taken his job seriously.  He’s loyal.  He’s smart, and he understands that a police officer is more than a public safety enforcer,” he then named Deputy Police Chief Toney Chaplin to replace Suhr.  Lee himself has faced criticism and calls for his resignation for his defending of the police department and his treatment of the homeless community during Super Bowl 50 in February. 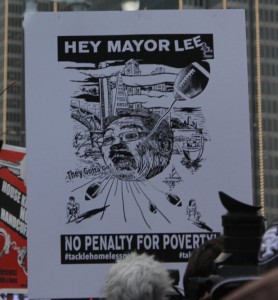 Marches and protests against San Francisco officials’ handling of local issues including police brutality and the treatment of those experiencing homelessness. This sign was held during a march held during the Super Bowl game on February 7, 2016. 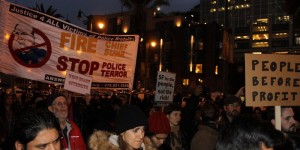 The name of the deceased woman killed by police officers has not been released but witness accounts described her as African-American.  In a statement to reporters this morning, Chief Suhr said that officers had been following the woman who was suspected of driving a stolen vehicle, 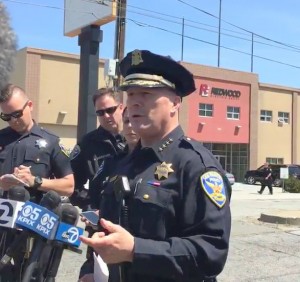 “They exited their vehicle to engage a suspect, one occupant in the car, a black female. The female didn’t comply initially with the investigation. We have one witness that says there was a back and forth with the vehicles and at some point during this engagement one officer a Sergeant fired one shot.”  She died in San Francisco General Hospital.

Public Defender Jeff Adachi’s though was critical of police actions,  “It is unacceptable for police encounters with unarmed citizens to end in bullet wounds and body bags. While details are still scarce, I am deeply disturbed by reports that the young woman gunned down today was driving away from officers.  She was entitled to due process and, above all, she was entitled to her life.  Police reforms and policy changes are meaningless if they aren’t accompanied by a major shift in police culture, away from shooting first and asking questions later. I am reiterating my request that the California Attorney General’s Office open its own civil rights investigation into the San Francisco Police Department.” 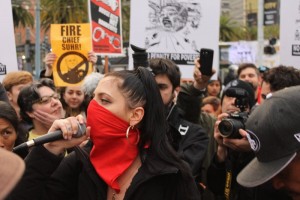 The sign held by a protester reads, “FIRE CHIEF SUHR.” 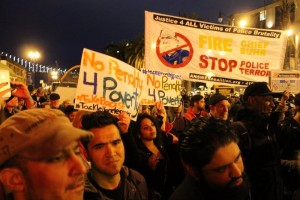 The Racial Justice Committee of the Public Defender’s Office released the following statement:

“The Racial Justice Committee recognizes the important symbolic step taking place today with Chief Suhr’s resignation.  As public servants we know that these decisions are not lightly undertaken. But as black and brown bodies of unarmed men and women lie in the streets of San Francisco, having been felled by way too many police bullets, we also know that this is only the first step toward building public trust in the City’s administration.

We renew our call, first made on May 3, for a change in police culture, from the top of the command staff to the cadet just making her way through the academy. It is imperative that every single officer given a uniform, a badge and a gun receive regular and repeated training on how implicit racial bias affects their perception of danger and of who is walking down the street in a suspicious manner.”