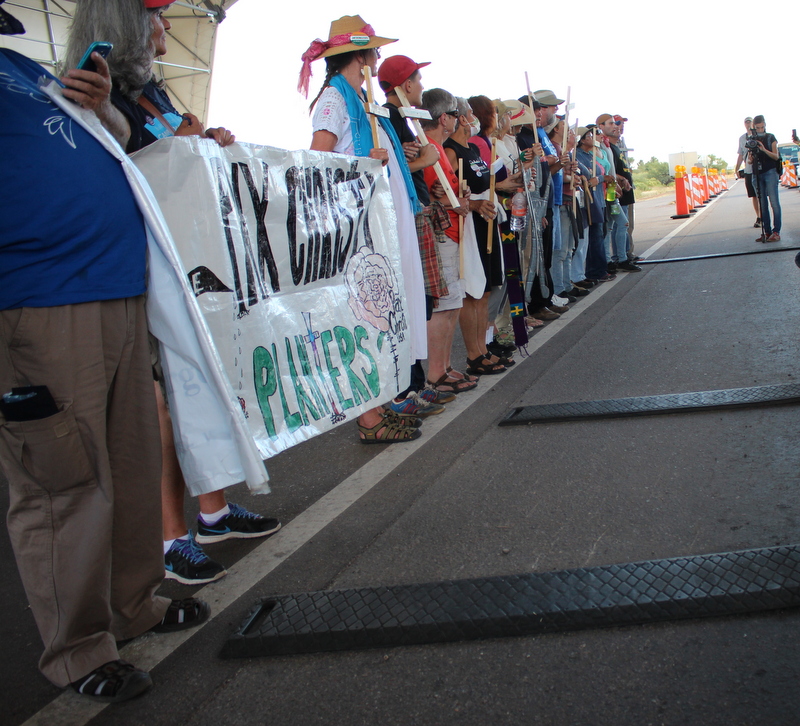 “Today we were able to facilitate free and flowing movement and the right to migrate.”

TUCSON-One activist who risked arrest at a border checkpoint protest, rally, and vigil between Tucson and Nogales said that the direct action there today was successful because traffic was able to flow through without being checked.  Border patrol agents were so unfurled by the apparently unexpected arrival of about 200 immigration rights activists that agents waved most cars through the checkpoint without stopping drivers and passengers to ask about citizenship as agents usually do.  Activists maintain that the checkpoint is illegal since the it is well away from the border (about 40 miles).

The action was organized by immigrant rights activists who participated in the annual School of the Americas Watch (SOAW) annual gathering, this year at the Mexico/US border.

The large group divided into multiple groups, one of which risked federal charges by remaining within the checkpoint while honoring the lost lives of those crossing the Arizona desert. The honor included the unidentified remains that had been recovered from the desert (144 so far this year).  That group held crosses bearing the names of some of those lost, while they chanted “Presente!” meant to memorialize a lost life.  They made the point that some migrants do not have the ability to walk through a checkpoint and are forced to cross the dangerous Arizona desert and mountains at significant risk to their lives.  One participant in the “high-risk” group included founder of the School of the Americas Watch Roy Bourgeois.

Another group offered solidarity from a distance and chanted, “Undocumented and unafraid!”, and another offered support directly from the checkpoint as they too risked arrest by crossing through the checkpoint.  None was asked their citizenship status as they crossed.

The artist group Political Poets led the chanting and singing of the high energy event while some organizers liaised with border patrol agents.  While some border patrol agents acknowledged the group’s right to protest, others threatened marchers with the possibility of tasing and tear gas though the threat never materialized.  Another threatened to tow cars of protesters at a nearby highway exit, but those threats didn’t materialize either.

The event was part of a weekend of actions organized by SOAW and ally organizations that this year moved from Ft. Benning, in Columbus, Georgia, home to School of the Americas, to the Mexico/US border.  Organizers say that they want to emphasize the connections between forced migration and US foreign policies that contribute to the violence in some countries-including US funding of the Central American Security Initiative (CARSI)-that compel people to leave violence, including government violence.

Most passengers in cars that were driving through the checkpoint seemed stunned to see something they hadn’t seen before, others honked in support and a few talked to The Nation Report.  One passenger expressed his emotion when asked by The Nation Report his response, “It makes me feel so proud.”  Another who was honking showed The Nation Report a photo of Jose Elena Rodriguez, a sixteen year old Mexican fatally shot in 2012 by Border Patrol through the border fence that separates the Mexican side of the Nogales, and the US side.  That agent, Lonnie Schwartz is currently facing murder charges for his actions.  That case is said by locals to give them hope that their work is producing results since historically it is rare that Border Patrol is held accountable for fatal shootings.

One protester held a sign that read, “If you’re not OUTRAGED, You’re not paying ATTENTION.”  She said that she’s from southern Arizona near another Border Patrol checkpoint, “We live in a war zone.  We have armed federal agents everywhere.  We have checkpoints that are permanent.  Everyday for us, our children have to go through checkpoints to get to school.  We have helicopters flying over our house, and we have people dying in our backyards.  It needs to stop.”

The action ended with a “die-in” of the remaining participants.  None was arrested. 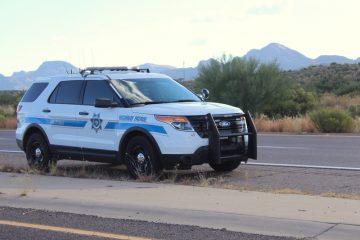 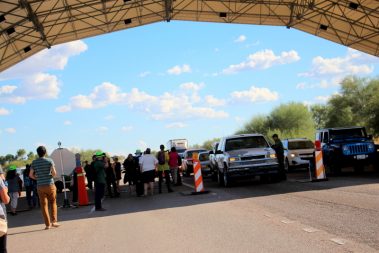 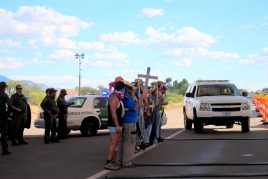 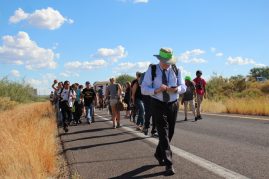 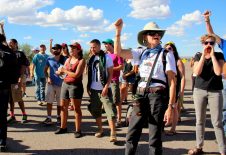 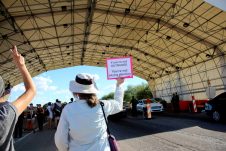 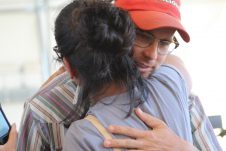 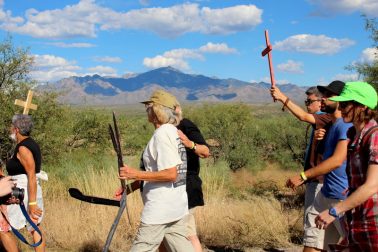