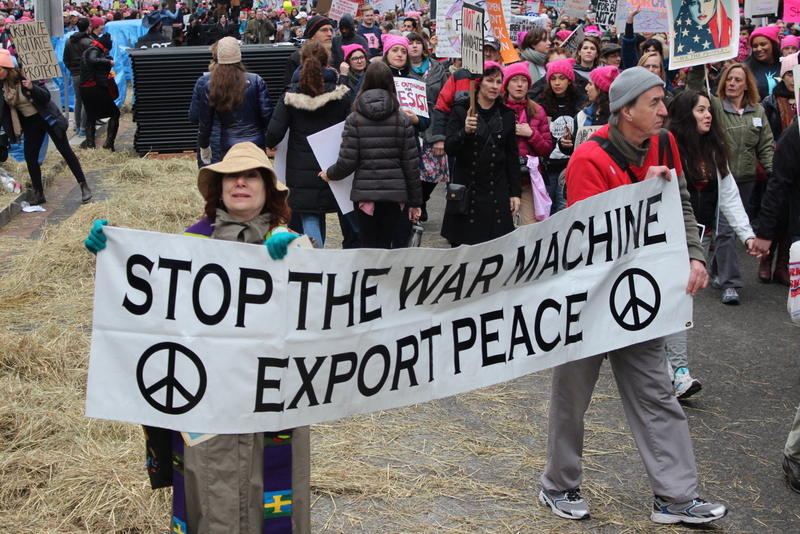 By Max Obuszewski and Janice Sevre-Duszynska

Woody Allen is reported to have said that 80% of life is showing up.  We firmly believe that bit of wisdom, and below is an example of his aphorism coming true.

For more than a year Janice and I from the Baltimore Nonviolence Center have been lobbying her representative, Congressperson C.A. Dutch Ruppersberger (D-MD 2nd District) on various issues including US support for Saudi Arabia. More recently, we delivered a letter to his local office In Timonium on this issue in October and November.  These letters were also emailed to Justin Brower, his foreign policy staff member in D.C.

On December 18 another letter, which was signed by 23 concerned citizens, including CODEPINK’s Medea Benjamin, was delivered to his local office and emailed to the D.C. office. Ruppersberger was chastised as he was one of five Democrats in the House who voted for the Farm Bill, which included a rule barring a vote on U.S. involvement with Saudi Arabia in Yemen.  The letter also sought a meeting with him, urged him to co-sponsor a resolution supporting the War Powers Act in January and to renounce campaign contributions from the top five weapons’ manufacturers: Lockheed Martin, Northrop Grumman, Raytheon, Boeing, and General Dynamics.  Since CODEPINK initiated its Divest From the War Machine campaign, eleven Representatives have signed the pledge.  We were not sure if the representative would meet with us.  But dependent upon the answer to our demands, we were considering doing a sit-in with others at a later date.

Richards Ochs and Mary Eliesar of Peace Action Baltimore joined us.  We presented the letter to Cori Duggins his district director, and were quite surprised as we were invited to meet with Rep. Ruppersberger.  The four of us went to a conference room with the representative and Ms. Duggins.  A phone hook-up was set up with Elliott Phaup, his scheduler in D.C.

It is suspected that Dutch met with us as he was feeling the heat from his Farm Bill vote.  The day after the vote, The Baltimore Sun published his apologia “A heartbreaking vote.”  He tried to argue that he had to vote with the Republicans because the bill was so good for Marylanders and that it was a bipartisan victory.  However, 191 House Democrats voted against the bill because of the poison pill.  Our argument was that Dutch could have told Republican leadership that they would not have his vote until the rule on Yemen was removed.

He has been in Congress since 2003, and I have met with him before.  He is a master of the bluff who tries to dominate the conversation.  While he said he was available for ten to 15 minutes, we jousted with him for 45 minutes. His staff tried to pull him away for another “engagement,” but it seems he enjoys the bobbing and weaving.  Once the content of our letter was explained to him, he took off about his visits to Yemen. We were told that on one of his visits his car was surrounded by people banging on the windows.

Since we were not there for storytelling, I cut him off, otherwise he would have free associated during the entire meeting.  Our colleague, Dr. Gwen DuBois, had a letter published that day in The Sun, and it was very critical of his vote.  Ruppersberger was quite upset about that woman from Towson.  We informed him that she lives in Mount Washington.

It was established rather quickly that he would co-sponsor the Wars Powers resolution in January. It must be noted that he signed on to Rep. Ro Khanna’s War Powers Act resolution on December 17, a few days after his Farm Bill vote.  We had been urging him for months to co-sponsor the resolution.

But he refused to renounce campaign contributions from the Big Five. It was absurd for Dutch to say that he is not beholden to his donors. Dutch is a center-right Democrat who is unbeatable in his district.  So the rationalization for accepting these donations was that he gives money to other Democrats.  Unfortunately, this money would be going to the more moderate Democrats. It was brought up that Steny Hoyer, the Minority Whip, favors corporate Democrats rather than progressives.  This was exposed by Lee Fang in The Intercept, April 26, 2018,  and was included in Michael Moore’s film FAHRENHEIT 11/9.

Of course, he agreed to our demand to meet with us.  And since that meeting, Janice has set up a meeting in D.C with Brower in early January while she is participating in the Witness Against Torture [WAT] fast. Besides WAT’s call for the closure of the US prison at Guantanamo, this year the group added the demand to end US involvement in the assault on Yemen.

I urged him to watch the video from Democracy Now, December 17, 2018, “From Arizona to Yemen: How Bombs Built by Raytheon in Tucson Killed 31 Civilians in Yemeni Village.”  After the meeting I sent the link to members of his staff — https://www.democracynow.org/2018/12/17/from_arizona_to_yemen_how_bombs.

Richard argued against any involvement with Saudi Arabia, including the sale of weapons as the Desert Kingdom has long been funding terrorists.  One of the groups under Mohammed bin Salman’s sponsorship is al-Qaeda in Yemen.  So he sent Elliot Phaup a link to the Associated Press article about Saudi duplicity — https://apnews.com/f38788a561d74ca78c77cb43612d50da.

Of course, Ruppersberger wanted to blame Iran for its support of the Houthis. However, Iran has not caused the humanitarian disaster in Yemen which includes death, destruction, famine and disease.  This humanitarian disaster is caused by Saudi Arabia and the United Arab Emirates with the assistance of the Trump Administration.

Then the national security hawk launched into his fear-mongering argument that it is a dangerous world out there.  Some of the threats he mentioned are coming from Russia, China, Iran and North Korea. Highlighting these threats is a rationalization for funding Lockheed Martin and Northrop Grumman to build more weapons systems for the U.S. and to sell them abroad. His arguments were un-persuasive.

He ignored U.S. complicity in waging wars which then lead to blowback.  While he agreed that the 2003 invasion of Iraq was a foreign policy disaster, he failed to understand that the Bush administration through its policies in Iraq led to the creation of ISIS. He was told to promote diplomacy, discourage warmongering and seek severe cuts to the military budget.  We argued that some 60 percent of the discretionary budget is military-related. But this has not made us safer.  For example, there are at least 800 U.S. foreign bases in the world, and it can be argued that the War on Terror has only created more terrorists.

Real security means having funds available to repair the infrastructure, provide for affordable housing, protect Medicare, Medicaid and Social Security, build more drug treatment centers, improve the schools and make available to all in need valuable social services. But instead we are wasting tax dollars on a bloated military budget.  I reminded the former Baltimore County executive that there are schools in the county without air conditioning. He said that is a different pot.  No, the argument can be made that severely cutting the military budget would free up funds to benefit cities and states.  Every bomb which Lockheed Martin builds is a theft from the poor.

We agreed with him that nuclear war is a grave issue, and informed him that we want to work with him on this issue.  We added, moreover, that climate chaos is also a major issue, and the Pentagon is a major contributor to carbon released in the atmosphere.

He got back to the fear-mongering and really went off the rails by stating that Africans are cutting off hands and committing atrocities.  First, there are 50 African countries, and each one has a name.  There was no specificity to his claims, but it was an insulting attempt to justify Trump’s military budget.

He expressed a concern about cyberwarfare, then attacked Ed Snowden. As the Ranking Member of the House Select Committee on Intelligence from 2011 to 2015, he claimed the National Security Agency does not violate the constitution by engaging in illegal surveillance. This was nonsense. When I asked him if he was aware of what happened to Tom Drake, the NSA whistleblower who suffered severe consequences, Dutch did not know him.

We were not impressed with Mr. Ruppersberger’s grasp of the issues, as his views are hawkish and supportive of the military industrial complex.  However, he is the member of Congress from Maryland’s Second District for the next two years.  His predecessor was a Republican, Robert Ehrlich, who voted in 2002 for the invasion of Iraq.  So it is essential that we keep up a dialogue to pressure Dutch on peace and justice issues.  We were able to move him to co-sponsor the War Powers Act resolution.  We intend to keep the pressure on other legislators as well on this issue and others, most especially legislation to lessen the risk of nuclear war.  You are invited to get involved with us in contacting your members of Congress.  Yes, It is a dangerous world made more so by the Trump administration, but waging war is obviously not the answer. So we must enlighten Congress to try instead diplomacy.  And we need your help.